April 03, 2010
As I have mentioned here before, my best friend Alexysjayd is Native American. Though she is Cherokee and Choctaw, her family moved to the Sonora area and her grandmother and family live with the Tuolumne Band of Me-Wuk Indians (if you visit the website, be sure to turn the sound on!). The Tuolumne Me-Wuk are known for their annual Acorn Festival in September, which I hope to attend this year.

I plan on studying anthropology, Native Americans, and ethnobotany (also a some wildlife education would be cool) in college next year--likely at UC Santa Cruz--so I am very much looking forward to next week when Alexys brings me up to her grandmother's house to spend time at the reservation, learning about the Me-Wuk people and spending time in Sonora, possibly horseback riding, hiking and exploring. I've been going to Pinecrest since I was a baby, and Sonora is a town nearby that I love exploring. It can't be mere coincidence that Alexys and I became best friends within a week of meeting each other last school year and that we both have a connection to the Sonora area. 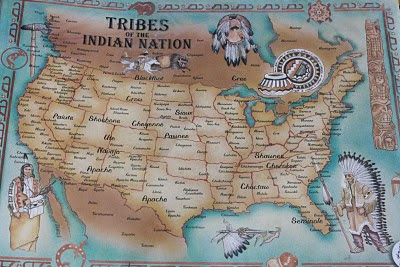 A map of Native American tribes of North America that my friend Taylor gave me. Alexys has the same map in her room.
Because we're going up there, I picked up some books from the library on California Indians. I'm reading the sections about the Miwok (which is the most common spelling I've seen, but varies depending on who you ask). Yesterday, my sister and I walked to Starbucks in the rain and spent some time reading and sketching. I took many notes from Before California: An Archaeologist Looks at Our Earliest Inhabitants by Brian Fagan. I copied down a Miwok creation story that he included within the first few pages:

"'Before the people, there was only water. Coyote looked among the ducks and sent one particular kind to dive. It went down, reached the bottom, bit the earth, and came up to the surface. Coyote took the earth and sent the duck to dive for seeds. He mixed the earth and seeds into a ball, which swelled until the water disappeared and the earth came into existence...'" (page 4). 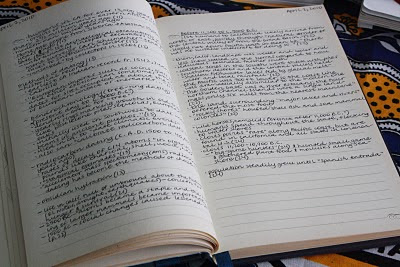 I've also taken some notes from Stephen Powers's Tribes of California. It is a historical account of the tribes he observed in the summers of 1871-1872 and contains some interesting first-hand accounts and information about the customs of the different California Indian tribes. Because it was written for an American audience at the time, it does contain some stereotypes and racist terms, like "savages," but I've been trying to look beyond the stereotypes to get a better picture of the California tribes at that time. 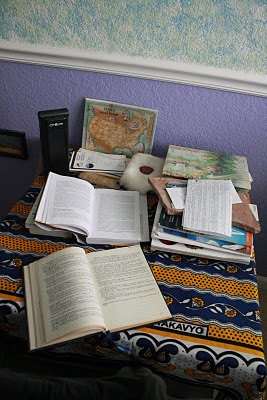 The desk in my room with book and notebook open. The table cloth is actually a Kenyan Masai fabric I purchased at an event during which a Masai warrior spoke. The flat stone on the right is some sandstone the city naturalist Eric Nicholas gave me at an ancient tools event last weekend. I have been working on carving a mountain scene on it. Near my Native tribes map, you can see some rabbit fur with a stone on top of it. I purchased the rabbit fur in Columbia, California when I was really young. I have a brown fur also. I have been waiting for the day when I figure out what to do with them. Any suggestions?
I can't wait to spend some time with the Me-Wuk people in Tuolumne. I've never been to a Native American reservation before, and will be sure to share with you all what I learn and experience.

On another note, Happy Easter!

Thanks for reading,
Green Gal

"Everything in this world talks, just as we are now--the trees, rocks, everything."
-- a Wintun man from the west bank of the Sacramento River