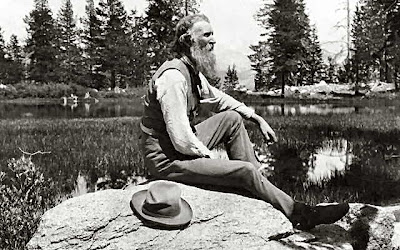 As Spring really takes hold, with rainy days (like today) and then hot, sunny days that feel like summer, I'm getting excited for the end of the school year and for my post-high school adventures. Spring is always a rapid season in the school year, with testing and finals in classes speeding things along and then before you know it, the year's over.

I realized this morning that it is the birthday of John Muir, the famous naturalist writer, among other things he was. I don't know if this was done on purpose, but I find it perfect that his birthday is the day before Earth Day. I also think it's something like fate that my birthday is tomorrow, on Earth Day. I didn't really even realize this fact consciously until I started becoming something of an environmentalist and nature-enthusiast myself. My good friend Blue was the first person to tell me "Happy B-Earth Day." I'm glad he was the first to do so, because he's one of the people I was close friends with around the time I become more conscious of the natural world. Thanks, Blue!

Yesterday, I saw a blue jay (I'm not sure exactly what kind of bird he is, but I refer to him in my journal as blue jay, so I'll just call him that for now) standing in the grass in the rain. He was hopping around and he disappeared behind a pot. I ran for my backyard journal and grabbed a pen and rushed back to the window. He had jumped up onto a pot with wilting tulips and was pecking at the dirt. Then he did the same thing in the pot of alyssum. So I wrote a poem about my friend the blue jay, who I see often in our yard. (There are two of these birds. One time I caught them kissing on a fence!)

A blue jay in the rain
finding seeds in untended pots
where tulips bloomed.
What does he call the rain?

Before this past September, I've never been much of a bird watcher or backyard nature observer. I did some homework in the backyard earlier this year and realized how much fun bird watching can be--and how easily it can distract you from work! I felt it was fitting to share some of my observations today, since it is John Muir's birthday and he was one of the grandest nature observers I've ever read. So here are some observations I've made in my backyard over the past months:

September 5, 2009
Peculiar sparrows (?) eating seeds off the ground under the cherry tree, kicking up dirt to find them. Three of them shuffling around.

October 19, 2009
Delightful little shoots of grass and plants, the result of a recent downpour. Baby tears by the left bushes positively thick and luscious! I could live in that greenness! Some growing near Butterfly bush. Shed roof window slid down the other day during the storm. In there today, it's so delightful and autumnal to see the views from inside. Could live in there if more weatherproof! The spiders are none too welcoming, either! 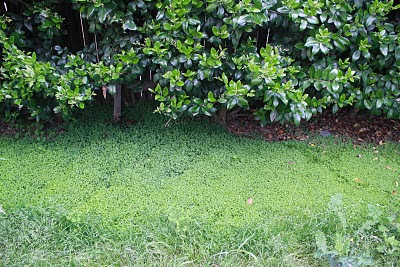 Though this picture was taken March 25, this is what the Baby tears under the bush look like. Recently, they've been as thick or thicker than they were in October.

February 22, 2010
Tulip shoots in the pots! Leftover from last year, they've sprouted without my even realizing it! Watched a Blue Jay just now (1:40pm) in the yard, carrying a peanut. I saw him with the full shell go into a neighbor's yard. He hopped on the fence to the cherry tree with a single nut. He was looking for a place to store it on the branches. Found a spot. A bee frightened me and I ran inside and now I've no clue where he's gone. Our yard is overgrown, a perfect wild place. Oh here's Blue Jay! I watched him breathing earlier, his little chest puffing out. There are two! They've just kissed or shared food. Delightful! He rubbed his beak on the fence post. I've tried whistling but he ignores it. He's just puffed his chest feathers out. Both on the fence, apart. What do they see, I wonder? He's staring at me. So agile! Earlier saw a smaller bird dipping her beak in cherry blossoms. He got his peanut! There's a squirrel in a rear-yard tree. The birds rule the garden, up on their high tree perch. Here's the little bird come from her nest. Squirrel in the same place. The jays have flown off. So much for doing my Economic homework. Oh--huge fly! Buzz. Squirrel jumped away. Lucy, the little bird with the nest in the cherry tree, is out on the branches, blending in with the blossoms. She's on the branch--Lucy chirped! 2:10pm. Skinny brown bird flew to shed roof. Is now hiding on the fence where a bush shields him. Jerry is his name. Cleared some grass from around the tulip shoots. Told them why and made sure none were flowering (don't want to upset the fairies!). Jerry (or a friend) is on chair under Butterfly bush. 2:50pm. Is it possible I hear Lucy's babies chirping? 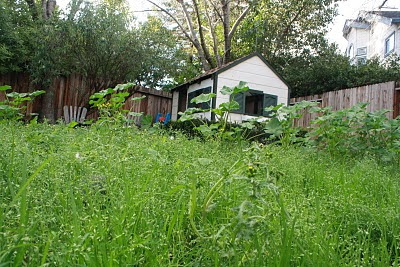 Example of how overgrown the backyard was. Now, there's mainly dirt with some leftover grasses. My mom pulled up all the "weeds," which I find pretty...though they do turn ugly when the hot weather hits.

Unfortunately, I don't have any pictures of my dear bird friends. Next time I see them, I'll try to take some pictures. 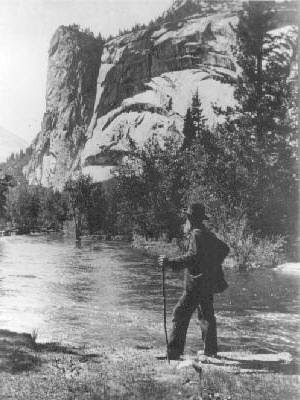 When we try to pick out anything by itself, we find it hitched to everything else in the universe.
-- John Muir