April 24, 2010
On Thursday, I celebrated my 18th birthday as well as the 40th anniversary of the first Earth Day in 1970. My mom took me hiking in the morning since school didn't start until 10:40 (thank you STAR testing!). At lunch, my Environmental Club had an Earth Day party and we ate leftover popcorn and had cookies from the night before when we'd shown the film FLOW to the public--at least 100 students attended (most for extra credit) and the event was a huge success.

Thursday evening, my family went out to dinner at our favorite Mexican restaurant and then at 7:00, we all attended a lecture titled "Sustainability: Then and Now." The City Naturalist Eric Nicholas spoke about how sustainbility was a necessary aspect of life for the Ohlone people who once lived in this abundant valley we now call home. (For more information about the event, see this article: Pleasanton Take Steps toward Sustainability.)

After the event, we went home for vegan, gluten-free cake and some presents, including a coffee maker for my dorm room, National Parks: America's Best Idea on DVD, and a beautiful slideshow presentation by my sister Kelsey of pictures of me from the time I was born until the present day.

I had a great birthday and Earth Day and am inspired anew to go outside and spend time with nature. Oh, and now I can vote :) 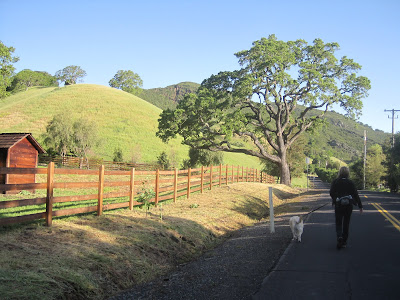 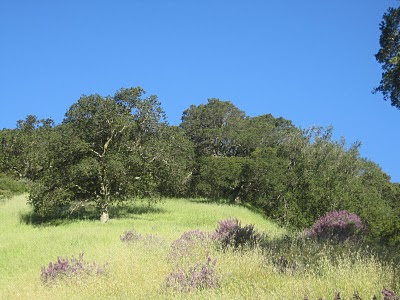 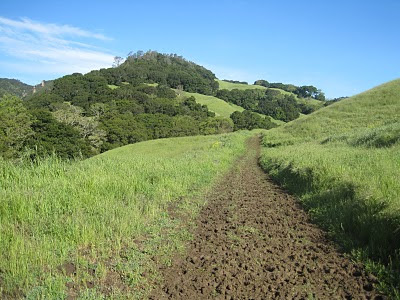 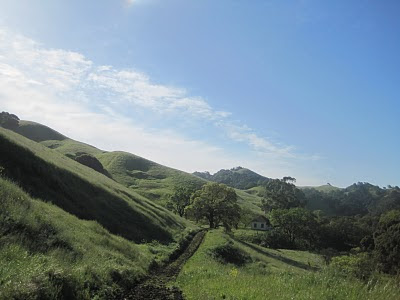 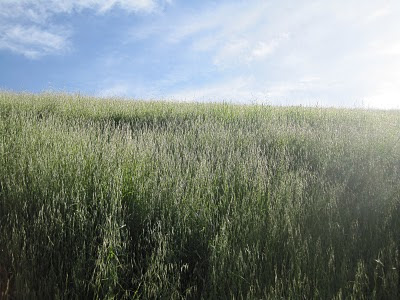 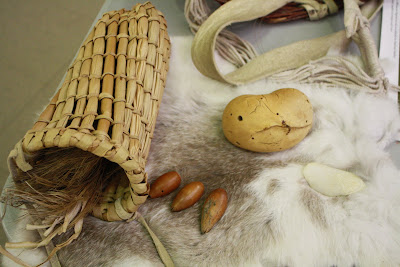 Berry-picking basket or some other sort of collecting basket, acorns and tree galls 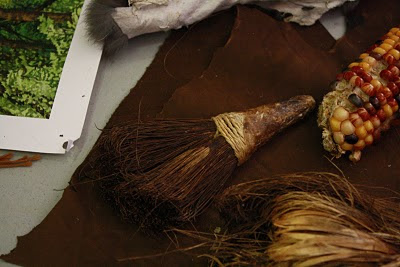 Soap root brush made from the soap root plant, a very useful plant that grows on shaded hillsides. The glue made from the plant is used to hold the end of the brush together. (More information about the plant can be found here.) 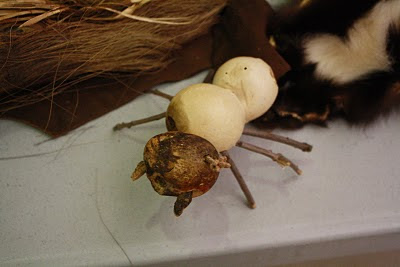 Animal figurine made from tree galls (I think that's what those are called...can someone confirm that?) 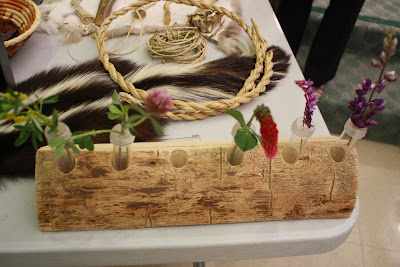 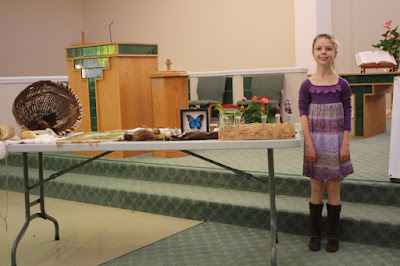 My sister Kelsey with the display table on which the above items were sitting on. Eric Nicholas referenced some of these items during his presentation.
Here are some notes I took about what he spoke about:

He asked us to remove the buildings, towns, streets, and infrastructure of our town and peel back time about 500 or 5000 years into the past, when the valley was a more natural setting. At that time, sustainbility was not an issue as it is today. It came naturally to the Native Americans, the Ohlone, because it was such a necessary aspect of their lifestyle that was so deeply ingrained in their living that it didn't pose any barriers as it does today. Before European contact and before the valley was paved and built upon, the land was abundant with life. Forty thousand elk, a large grizzly bear population, and water trickling down to the valley from the surrounding hills. There were many lakes, ponds, and wetlands and thus many grizzlies, who thrive in wetlands and rolling hills. They were sustained by the steelhead trout populations living in the nearby rivers of the valley.

There is evidence, he told us, of humans living at Mt. Diablo 9000 years ago. It is now believed that humans lived in the Bay Area 13,000 years ago. Those people living here had to maintain that abundance the land offered if they wanted to subsist comfortably. It was an aspect of their religion to maintain a balance with the natural world. And they weren't just wandering people happening on berries and elk--they were highly trained in the lives of the animals they hunted and the distribution of the plants they relied on. They didn't move around a lot, but remained in the same area for most of their lives, highly aware of the location of what they needed to survive. They were "well acquainted with the land and resources." A major part of sustainbility is that understanding of how nature works and being able to fit into that natural cycle and way (just this moment I'm reminded of the Tao, which is something we're studying in my World Literature class. Sustainbility is also living according to the Tao, or following the path and not forcing anything, but letting it take you along in life. I love when different aspects of my life fit together!).

Eric then picked up the soap root plant and asked if anyone knew what it was. I did, of course, but I let someone else say it. He listed some of its uses: the ground bulb becomes soap; insect repellent; wound disinfectant; glue; bundles of the fiber become a brush and the glue becomes the brush handle; it's flammable so it was used to start fires; and the onion-like bulb could be cooked and eaten. He didn't mention this, but the plant was also used to stun fish in rivers so they could easily be caught. This was only done on occasion when a large quantity of fish were needed and this practice is illegal today because it kills off so many fish at one time.

With so much available to them, the Ohlone wanted to maintain it so they'd always have access to it. Thus, they sustained it by living so that they didn't ruin any of nature's offerings. To keep the land healthy and fertile, they set controlled burns, which removed the cluttered undergrowth that hindered plant growth, including plants that were used medicinally like yarrow. Today because we do not have such controlled burns, our wildfires in California are deadly and out of control. The land used to be more open underneath trees and in forests, but today it's cluttered. The people who once lived here truly knew how to safely manipulate the land in a way that didn't steal the abundance from other life.

Eric told us that when settlers first came to California, they described the landscape as that of an "English garden." There was color everywhere and such abundance of plant life that today we don't really see because of the non-native plants that have been introduced. We think golden hills are iconic California, but it didn't used to be that way. They used to be lush and colorful, but non-native species have taken over and left the beautiful hills brown. Today, we have our grocery stores, hardware stores, clothing stores, medicine shops, etc. But for the Ohlone, their stores were the land and the items that we now purchase were, in a more natural form, something the Ohlone could get from the land. They knew how to maintain their stores, too, so they could always have access to those items they needed. The Ohlone didn't practice agriculture as some other Native Americans did (the Native peoples who did use agriculture were those who lived in less abundant areas like the Southwest who needed to develop more complex tools and ways to survive in the harsh landscape...the Ohlone had everything they needed to live and didn't have to develop agricultural methods to have enough food), but they did shape the landscape so they'd have access to their needs.

Many Native cultures made pottery, but not the Ohlone. They were basket weavers, along with many of the other California tribes. The Pomo especially are known for their intricately beautiful baskets. Eric showed us an example, a willow basket. He noted the straightness of the individual willow branches used to make the basket. The Ohlone would actually prune willow tree branches to grow straight so they could use them in their baskets. How awesome is that!?

Like other Native peoples, the Ohlone utilized everything they gathered or hunted; nothing was wasted. They didn't take everything, for they didn't need everything and wasting it would mean there would be less of it next time they needed it. The Ohlone also had a much, much smaller population than we have now and because of this, they had great abundance in the valley.

The Ohlone were so well-off, they only had four-hour work days and didn't have to work very hard to survive. For example, there were so many water birds in the valley that if all the birds were to fly into the sky at once, they would blot out the sun.

A man asked about how the grizzly bear population affected the people living in the valley. Grizzlies avoid groups of people and the Ohlone knew it was not safe to travel through a forest alone. They likely had encounters, but both the grizzlies and the people were aware of how to avoid confrontation. Also, Eric said, because there was less undergrowth, the grizzlies couldn't hide, so people would see them more easily and be prepared.

Someone in the audience asked a question about the Alviso Adobe Community Park. They asked if the Ohlone actually lived at the site. There is a bedrock mortar there dating back to 3500 BC. Eric said that the cupules found at the site were not used to make acorn mush, which is typically what people associate mortar cupules with. There isn't a large supply of water, like a river, near the rock, but the cupules are also too small to have been used for acorns. He said the site was definitely frequented and was like an "inbetween place" for the Ohlone. To the southwest of the site where the park is there was an Ohlone settlement and northeast of the site there was a burial site. The site where the park is was likely a ceremonial gathering spot between these two places and the cupules were likely used in preparing medicine for ceremonial purposes. I never knew that before!

Eric spoke a little about the Alviso Adobe park itself. Some people in the audience had never been up there, and he encouraged them to visit. He talked about the experiment going on at the interpretive park. It's an "experiment in connecting with the land," he said. "Which is important." According to him, students seventh grade and down have grown up with recycling and sustainbility and for them it's the "norm." That's so great to hear because I don't know anyone that age, so I hope that's really true. That means in just a few years, there will be kids interested or trained in those areas who will be entering high school. Let me tell you, the high schoolers now are definitely not aware of those concepts, except very basically. He told us that at the Alviso Adobe, native plants and covercrops have been planted. Covercrops are vital and include nitrogen-fixing plants like wild peas. The community is participating in this experiment by volunteering to plant new natives and take out the non-natives. He hopes to transform the park to the landscape of the past.

I was actually at the park yesterday after school to meet with him regarding an article I wrote about the summer camp he runs called Ridge Runners. The park is so beautiful this time of year, with lots of color and green plants. This summer, I hope to be a counselor for Ridge Runners camp and, if not, I will definitely be up there volunteering often.

Come to the woods, for here is rest. There is no repose like that of the green deep woods. Here grow the wallflower and the violet. The squirrel will come and sit upon your knee, the logcock will wake you in the morning. Sleep in forgetfulness of all ill. Of all the upness accessible to mortals, there is no upness comparable to the mountains.
-- John Muir