September 08, 2015
Last week, I posted on my personal Facebook page asking if any of my friends had a used worm bin or other plastic bin that I could buy from them. I wanted to begin worm composting, but I didn't want to buy new plastic, and I have a lot of friends who are into gardening. I figured someone out there must have something I could repurpose. A few friends told me they knew of places to get bins, but one of my Facebook friends, Janet, said she had a worm bin that she had barely used. And she said I could have it for free since it wasn't being used in her yard! I love when things work out like that!

Fortunately, she lives only 25 minutes away by car, so on Saturday, Green Guy and I drove over to pick it up. It's one of those Can-O-Worms brand stacking bins, and I am so excited to begin worm composting with it! In fact, I've already prepared the bin for when my worms arrive later this week, which is what this post is all about.

Before I get into the details of preparing the worm bin, here's a fun side note: I met Janet through the online bicycling community through her blog, One woman. Many bicycles. She blogs about how to be a bicycle commuter in heels, dresses, and without messing up your hair, and she provides really practical advice for all kinds of bicycle topics! After "meeting" each other online, we finally met in person at the National Bike Summit in D.C. this past March, and we were both at the Silicon Valley Bike Summit a couple weeks ago. It's fun to know people mostly online and then see them in real life! Please visit her blog, like her Facebook, and follow her on Twitter for some really helpful bicycling advice, information, and stories. Thank you again for the worm bin, Janet!

So, worm composting. I had read about it online about a week ago and decided that it sounded way too fun not to give it a try! Plus, it will allow us to put our food scraps to use in the garden instead of tossing them in the trash since San Jose doesn't have a food scraps program as part of its waste collection.

I spent some time reading articles, gardening blog forums, and figuring out how this all works. It's very simple, really, but the more I read, the more I find out about how to do it most effectively. I just can't wait for the worms to arrive so I can get started--which is why I got a head start and set up the bin yesterday even though the worms won't arrive until later this week by mail. 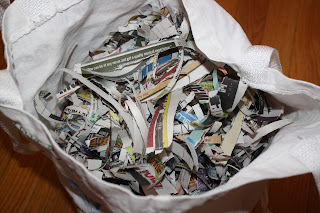 I read 2-3 free, weekly newspapers on the bus commute each week, and I had begun saving them up last week when I decided to start worm composting. Shredded newspaper is supposed to make great bedding for the worms, so I tore up all of my newspapers into 1/4 '' to 1'' strips. I separated out any glossy pages because these are harder for worms to break down and they could contain chemicals. 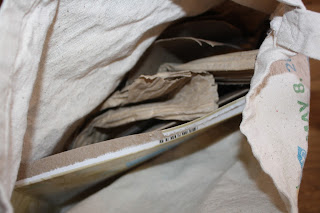 I also collected some bits and pieces of cardboard-type materials, such as a used tissue box and some papery packaging material. These will be used as a cover over the food scraps and worms to keep in the moisture and darkness. 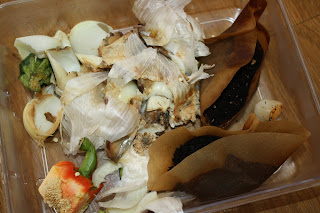 We began collecting uncooked food scraps in a reusable container in the fridge, such as some onion that had started to go bad, zucchini tops, bell pepper tops, and some coffee grounds. 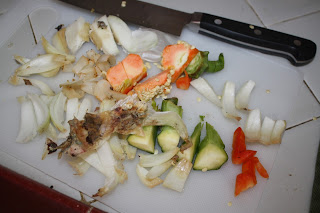 I chopped all the food scraps into smaller pieces so they'd break down more easily. 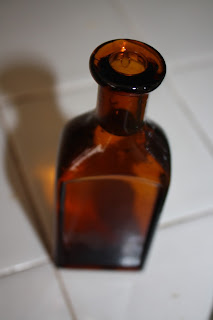 Before going out to the worm bin, I filled up this old little bottle with water to use for wetting the newspaper. I don't have a spray bottle, and I've found that this bottle lets just a little bit of water out at a time. I use it for watering my seedlings, too. 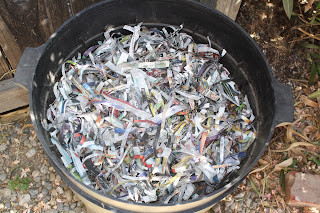 First, I lined the bin with a couple inches of shredded newspaper and then got it moist. Everywhere online says it should be fluffy, moist, and not soggy. 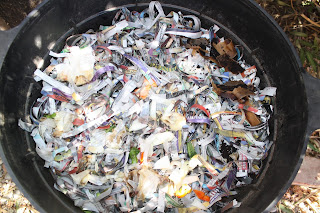 Then I folded the food scraps into the bedding, putting only one clump of coffee grounds on one side. I had read that worms may or may not be into the coffee grounds and that it helps if they're separate from everything else. 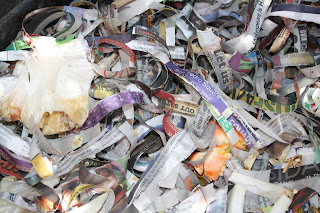 Just a close up of some of the food scraps in the bin. I later removed some of the onion because I read that worms don't really love onions, but they will tolerate them in moderation. 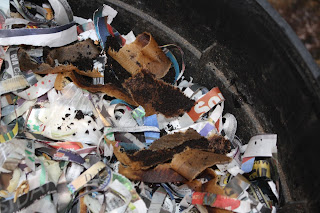 A close up of the coffee grounds and shredded filter off to one side. After adding food scraps, I scattered a handful of dirt on top of everything to provide some gritty material for the worms. 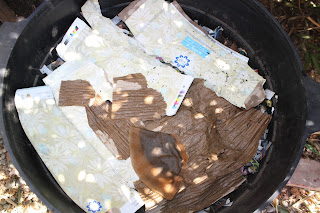 I covered everything with some damp pieces of carboard/tissue box material. I found that later in the day, everything had dried because the weather has been so hot, so I may need to water the cardboard cover more often until the weather cools. 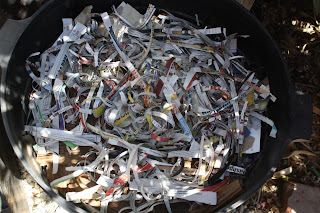 On top of the damp cover, I put some more dry newspaper. 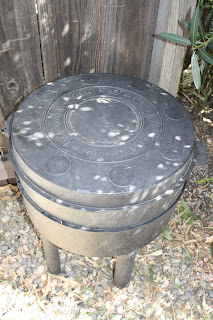 Here's what the worm bin looks like all closed up! There are tiny holes in the top of the lid, as well as at the bottom of the tray. Underneath the tray, there's a reservoir for any liquid to drip into, with a spout so that the liquid can be used in the garden. I will set a bucket underneath the spout to collect anything that drips out because the spout nozzle is missing from this set--and I actually read it's better to leave the nozzle off to provide more air flow into the system.

Now I let nature takes its course and begin to break down some of this food so that by the time the worms arrive, it's ready for them to begin living their little worm lives in there.

I'll be sure to post photos once the worms arrive and settle in!