2000 new friends just moved in out back!

September 11, 2015
The day has finally arrived! The worms are here! The mail person tried to deliver them yesterday, but we knew we wouldn't be home and put a note on the mail box. The mail person left a note indicating which post office they'd be kept at until we picked them up. 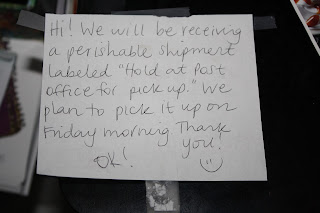 This morning I biked over to retrieve them. On the way to the post office, I picked up some corn meal since I had read it would be helpful for them to have something to munch on while their first set of food begins decomposing. There's been some food slowly decomposing in the bin since earlier this week, but I don't know how well that stuff's been decomposing. 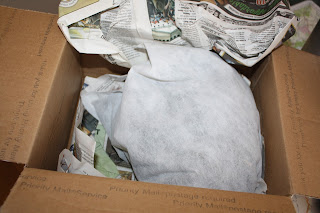 Now that there are 2000 worms with some of their castings in there, I think the food will break down better since there's more moisture and material. I made sure to really wet the bedding and cardboard pieces on top because of the heat we've been having. I may need to water the bin daily if this hot weather continues. 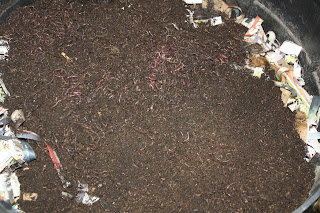 After I put the worms in the bin, I added some more food scraps on top. Then I covered with a layer of wet newspaper shreddings and then another layer of cardboard materials that were also wet. The lid went on top, and now they're doing their thing!

Here are some other photos I've taken this week of what's growing on in the house and outside: 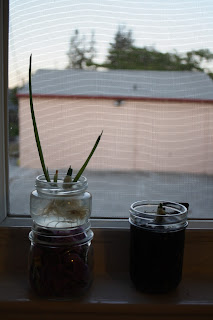 I planted one of the green onions in some really damp soil on the window sill to see how that goes since the last attempt failed from too much heat outside. I was inspired to try something new with them because a friend from college who works at an organic farm on Maui posted a photo of really beautiful, huge green onions. 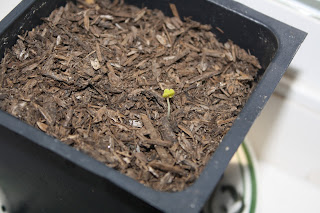 One of the arugula seeds I planted on Tuesday has sent up a little sprout! These are on the windowsill in the living room. See more photos of the seedling containers, including egg shells, here. 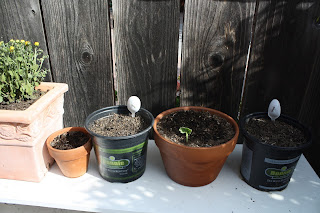 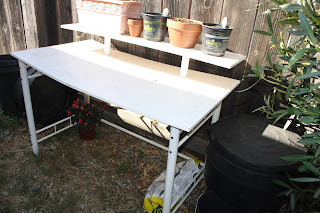 Last year, I was given a free desk by a friend from college, and it ended up bowing in the center after using it for awhile. As a desk, it's really not that useful anymore since it's not flat, but we decided to put it on our side yard, and it actually works perfectly as a potting station!

My old housemates would probably find this pretty funny because this desk sat in their backyard for a few months after I moved out. Goodwill wouldn't take it, so I was waiting until I could take it to the dump. Once we finally picked it up in Green Guy's car and drove it to the dump, we found out that the dump had already closed that day. Frustration turned into creativity, and we realized we could repurpose it! The worm bin lives right next to it in the sideyard. 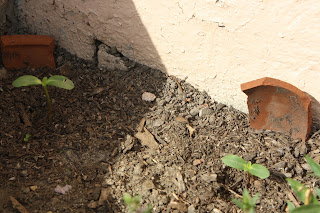 Our sunflowers have sprouted! 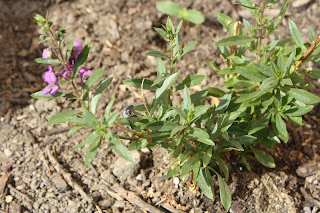 The angelonia plant seems to be doing well after its transplant into the soil. 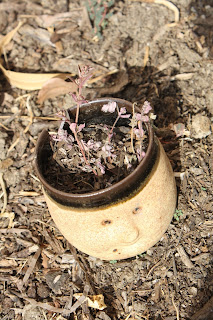 I gently pulled out some weeds from the yard and replanted them in this guy's head to add some wild hair. They seem to have taken root again in there. 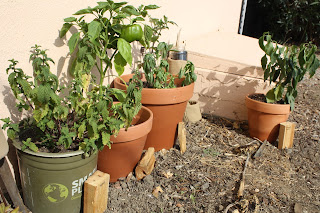 The mint, bell pepper, basil, tomato, and jalapeño plants seem to be doing okay in this crazy heat. I was able to repurpose some wood into plant markers. My neighbor had taken apart some kind of furniture and put it in the front yard to be picked up, and I swooped in and grabbed some smaller pieces.

Thanks for reading, and happy Friday!
Green Gal