February 23, 2010
My Human Geography class this year has been a very useful source (no pun intended!) of education regarding environmental issues. It has, of course, taught me a lot about the world in general, such as different aspects of culture, religion, ethnicity, political geography, political conflict and many other things. But in regards to the environment, I've learned about agricultural practices and have become aware of terms like environmental determinism (how the environment can influence culture and human activities) and possibilism (the concept that the environment does create a limit on human actions, but that humans can overcome some limitations and change the physical environment to fit their needs). With the study of agriculture came a look at the issues of agribusiness, genetically-modified crops, feedlots, grain-fed cattle, etc. Right now, we're learning about industry, development and energy resources.

Last week, we watched Morgan Spurlock's 30 Days episode on coal mining. Spurlock is the man who made Supersize Me and has a television show in which people spend thirty days doing something they've never done before. A Retired NFL Cornerback spent thirty days in a wheelchair, keeping his legs immobile to simulate paralysis. An avid hunter spent thirty days participating in PETA activities and spending time with animal rights groups. I've never seen the show aside from the episode we watched in class, but it was very interesting and eye-opening. Spurlock spent thirty days living with the Lusk family in West Virginia, Spurlock's home state. 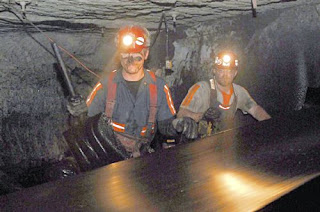 Spurlock spent most of the thirty days working in a coal mine with Dale Lusk, learning how to plaster the walls, hold up the ceiling with wooden beams, shovel coal and deal with nasty coal ash all over his face after each day he was in the mine. The episode brought you right into the coal mine. When a fan shut off, the crew in the mine had to evacuate fast to avoid a possible explosion from the gases that can ignite from any sort of spark in the air when there is no circulation. On another day, Spurlock wore a respirator. Few miners wear them and he wanted to find out first-hand why not. It can prevent lung diseases like black lung, which are common issues that coal miners deal with after decades spent mining. Unfortuantely, it was practically impossible for him to breathe with the mask on, and heavy lifting and movement with the mask made it difficult to function. Spurlock took it off before the day was done. The filter on the mask was covered in black soot. All of that soot goes into the miners' lungs every hour of every day they spend mining. Most miners spend upwards of thirty years mining coal. There's always a risk of explosion or collapse, and the risk of lung disease is prevalent.

Something that surprised me was the coal miner's view of their job. They enjoyed mining, but were aware of and cared about the environmental destruction their job causes. It's one of the only good-paying jobs in their region and for most, their fathers were coal miners so they became coal miners, too. It's their home they're mining in, and they do care about their environment. Of course they wish there was something else they could be doing that wouldn't be damaging their land, but for now it's the only financially-beneficial job in the area. 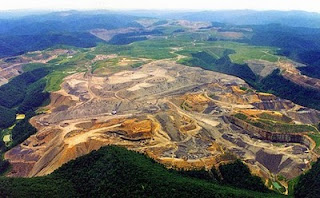 The show also talked about mountaintop removal mining. An anti-mining activist who had once been a miner himself spoke with Spurlock and showed him a mountain that had had its top removed by blasts and excavation of coal. It was devastating.

I had never really thought about what the miners themselves thought whenever I thought about the problems with coal. I just looked at coal mining as a bad news business and never thought more about it. The people working in the mines work there because their local economy centers on the coal industry; it's where the good-paying jobs are. They want there to be an alternative, but there isn't a cheap, efficient alternative out there, and there isn't another good-paying job for them to turn to, especially for those who've been mining their entire lives. It isn't the miners who are the problem. The problem is that we don't have an equally-cheap solution.

Spurlock interviewed one of the executives of the local coal company for some perspective, and he also talked about how there isn't an alternative. They're just supplying a demand for cheap electricity that the American people have obviously asked for with all this electricity we use up. Coal accounts for 50% of our nation's electricty usage and we have a lot of it. The abundant coal reserves aren't just going to be left alone. There's profit there and there will always be someone willing to mine it.

We need to utilize alternative energy sources, but they won't compare with the efficiency of coal if they aren't cheaper. If we were to stop mining coal, there'd be many people without jobs. Somehow we need to create jobs for them, perhaps in the alternative energy field. In the meantime, to protect the miners, the government should create stricter safety laws so miners aren't at such a risk from explosions, collapses and lung disease. The industry needs to take better care of its miners, too, and listen to their needs. Mountaintop removal especially needs to be stopped with government support. It's so irrevocably devastating for everyone in the surrounding area and is such visible destruction. It creates coal sludge (as does all mining) that can't go into the rivers because it is damaging to ecosystems and can end up in people's drinking water. We really need to stop relying so much on coal.

Today we talked about nuclear power. I didn't think I was for it before the discussion, but I'm most definitely against it now that I've learned more. Yucca Mountain? I'm glad I live on this side of Nevada--that's for sure!

On a related note...

In October, my Advanced Drama Class performed its annual AIDS Benefit. The show is free to the public, and all donations are given to UCSF AIDS Health Project.

The show features student-directed, student-performed vignettes that are basically movement pieces to different songs, each with a theme. Some do pertain to AIDS, but most relate to other current issues, like war, relationships, the environment, and, of course, there's always some comedy to liven the mood.

My piece focused on a young activist trying to stop a company from building a coal-mining plant on her favorite nearby mountaintop. The actor who played the activist was my close friend Jen. The antagonist, playing the company's president or spokesperson, was played by my other good friend Courtney. The piece was set to Eddie Vedder's "Rise" from the Into the Wild soundtrack. (That soundtrack is basically all I listen to on my iPod, along with the movie's score.)

Here are some photos from the performance: 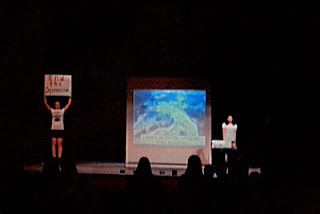 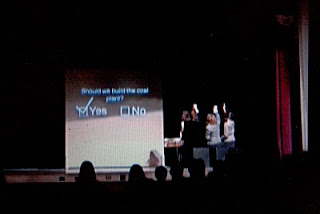 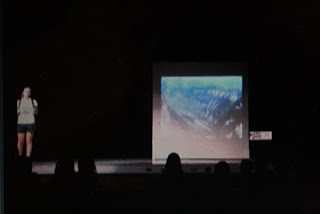 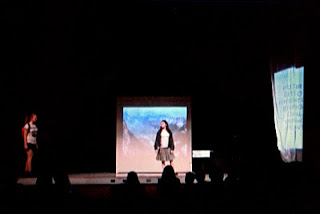 Unfortunately, in the end of my piece the coal company won. A sign went up at the site of the future coal plant just as Jen was enjoying the serene vista from her special mountain. In the middle of the piece, I included a powerpoint with information about coal mining and encouraged the audience to visit EarthJustice.org to take action against mountaintop removal mining.

"In America today you can murder land for private profit. You can leave the corpse for all to see, and nobody calls the cops."
-- Paul Brooks, The Pursuit of Wilderness, 1971