Comet the cause of megafaunal extinction in North America?

February 27, 2010
Lately, my favorite thing to watch on TV has been Ken Burn's National Parks: America's Best Idea series. Sometimes I'm lucky enough to catch it when it's actually on TV, but many days I end up watching it On Demand. Last night, the only episode On Demand was one I've already seen, so I scanned through the other History & Nature shows on the Comcast On Demand menu and saw that there was something from PBS Nova called "Megabeasts' Sudden Death." I opened it to read the description and was so incredibly excited! It was an episode about the new theory of what killed off the megafauna (like mammoth, mastodon, giant sloth) at the end of the Pleistocene epoch, right around the time of the last ice age. If you recall, I wrote an entire research paper on this subject for my English class earlier this year, so I was very eager to watch the show.
Short-faced bear and other animals, with mastodons in the background.

It focused on the new evidence that a comet is what caused the mass extinction, which I did read about while researching for my paper. The episode raises some interesting questions and the theory seems like it could be a valid potential cause for the extinctions. My paper focused on human-caused extinctions, so I didn't discuss the newly proposed comet theory extensively. Basically they've found concentrations of iridium, a very rare Earth mineral that is found in extraterrestrial matter like comets, in layers of sediment dating from the time of the extinctions around 13,000 years ago. A comet hitting Earth would have created deadly conditions: fires that would burn both the animals themselves and their available food source, blackened skies, "shock waves" of wind from the impact points (think nuclear explosion). The theory is similar to the theory of what killed the dinosaurs. No crater has been found to support this theory, but some scientists believe the comet may have exploded before impact, scattering the debris and leaving no trace of the impact on the landscape. It may have hit the giant glacier that covered most of North America. The evidence would have disappeared in that scenario as well. 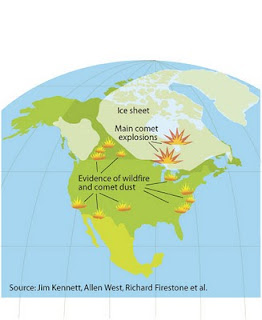 I was wondering what would have happened to the Clovis people, who had arrived in North America around that time. It is believed by some that these immigrants from the Asian continent (arriving via the Bering Land Bridge) were the cause, or at least a major factor, in the demise of the many large species of mammal living in North America. The animals were unaccustomed to humans, unwary of them, and so these tool-wielding men killed off the animals remarkably fast, devastating the ecosystems and wreaking havoc on species' survival. They certainly hunted some of these mammals, as is evidenced by kill sites where their famous Clovis points have been found lodged in the ribs of these great beasts. Evidence has not been found to suggest that they hunted short-faced bears or saber-toothed cats, which did go extinct, so something else must have caused them to die off. But what would have happened to these Clovis people if a comet struck? I recall reading that the Clovis culture disappeared from the record, leaving no trace after that point in North America. Some attribute that to the fact that their food source was too scarce, so they migrated south and continued their reckless killing spree on the megafauna of South America (which did appear to have happened). But couldn't they also have been killed off from the same comet-caused conditions that killed of their meat source? It seems that it would fit in with the theory. Some cultures following the Clovis appear to decline rather suddenly, like the Redstone people. They may have been the ones affected by the comet, if such a comet existed. After this period, many other Paleoindian cultures emerged, eventually developing into the Native Americans of more modern times. 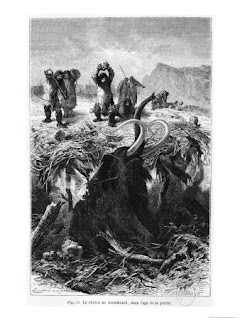 What about the other animals living in North America who survived? Grizzly bears, moose, bison...they weren't severely affected. In the case of the overkill theory, their survival can be attributed to them being immigrants themselves and thus wary of humans or that they weren't so large as to be easily hunted. But a comet would have damaged their species regardless of these factors.

Comet theory scientists also wonder if the comet conditions caused a resultant ice age that took place during this time. Climate has been considered a possible factor in the species' extinction, but perhaps the comet is what caused this climate change. It would help explain why these animals were affected by this particular time of climate change when in previous climate change instances they were not.

At this point, many people are skeptical of the comet theory. It definitely is intriguing, but further evidence will be necessary to really bring it to the level of validity that overkill and climate change have as potential causes of the megafaunal extinctions. I'm really glad I happened to find the program last night On Demand. NOVA has some great episodes. I will definitely be searching the NOVA website for more information on interesting topics. 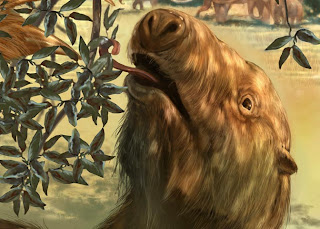 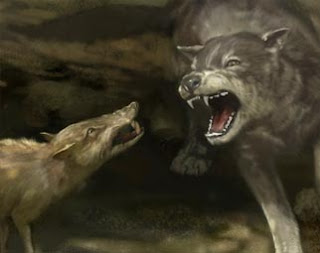 "Every creature is better alive than dead, men and moose and pine trees, and he who understands it aright will rather preserve its life than destroy it."
-- Henry David Thoreau