Blog Action Day 2009: Climate Change: Denmark and a bit about the economy

Today is Blog Action Day, as you probably have heard. The theme for this year is climate change, which isn’t a stretch for me to write about at all—which you would obviously know if you’ve read my blog.

But today I’ve decided to write about something that is beyond my breadth of knowledge: Denmark, and a bit about the economy. I have a friend named Emil who is from Denmark, and he and I were talking recently about climate change. He started talking about all the great things Denmark does that makes it sustainable and it was so interesting! I asked him if he would give me some information for my blog and he did. 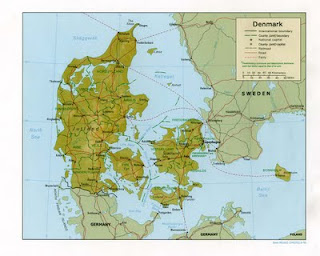 He mentioned that wind energy supplies one fifth of all energy used there, adding that “a large part of the coasts and green fields” are covered with wind turbines. I’m not a huge supporter of covering every windy space with wind turbines, but I also don’t have another solution, other than that we reduce the demand for energy and live simpler. That can’t solve the use of energy, of course, but it can help to reduce the need. I’ll be honest and say I’m fairly conflicted on “green” technology. While I see some of it as necessary, there’s a part of me that says it’s leading us in the wrong direction. (Read What We Leave Behind if you want to see why I feel that way.)
Anyway, the best part of what Emil was telling me is that “Denmark is very community based, it is easy to find everything you need within a small area, and thus simple transportation such as riding bikes and public transportation is more common and easier [than in other places].” That is so vital. So vital! Without that community-based living, we cannot become sustainable. Globalization has made us dependent on China for our cheap plastic bins (as my world history teacher Mr. Murphy always used to remind us), and we now expect to have certain things because we’ve been spoiled by their cheap availability at Walmart and Target. Community-based living provides you with the things you need without the need to import or export. Food grown locally is distributed locally. Clothing is made locally. Everything you need is made within the community and you stop depending on foreign imports. It’s sad to me that we have lost the ability to consider that feasible, since we lived that way for centuries before the industrial revolution. Now we have created this tangled web of reliance—oil being the most well-known, problematic thing we depend on (read Josh Tickell’s Biodiesel America or watch his film based on the book…I don’t exactly agree with everything he says, but he does a nice job of showing how oil is a serious issue and how it causes war and cancer, among other problems.) While globalization can be a good thing—bringing countries out of poverty, connecting people across the globe—it seems to me it brings more problems than solutions. It encourages rapid development and intertwines and encourages the widespread use of economies based solely on exploitation and the sale of landfill-destined product (like ours).

Check out this excerpt from a thought-provoking article I came across (New Green Deal or Not: Industrial Capitalism Is Assured Death by Dr. Glen Barry). We need to be having discussions like this if we want to make the best decisions at this critical time. We need to question all the steps our governments and decision makers are taking to reduce climate change and we must be a voice for the physical, living planet, rather merely than for the growth of the economy:

The web and hallways of power are abuzz with the promise of green technologies to fix the financial system, solve climate change, all while providing jobs. Who can be against green jobs? It has become as American as baseball and apple pie. Yet in this single-minded pursuit of the holy grail of green growth, we are putting all our money and efforts into reforming an economic system whose dysfunction -- equating growth based upon ecosystem destruction with progress -- is precisely why we find ourselves in twin crises of growing poverty for the formerly affluent, and collapsing global ecosystems.

I am against green jobs, if the emphasis upon jobs includes more economic growth on the back of ecosystem harm. Nothing grows forever. And certainly not industrial and speculative capitalism which kills all it encounters through explosive growth. Economic stimulus is like feeding a cancer cell. There are few new wildernesses to liquidate in order to bump up GDP, and more growth is not the answer to anything but protecting the narrow interests of the ruling elite. Something was lost when capitalism went from providing local markets to exchange surplus, to becoming faceless global corporations pushing growth above all else, and finding all types of speculative tomfoolery to do so.

Now I don't know an extensive amount about the economy, but I do live in a developed country and have gone to school (where a lot of the time we just learn the way the world works) for the past 12 years of my life. From that basis of experience, it seems to me that our governments and many actions taken by people in the world (Fast Food Nation gives some great gory examples) are often persuaded in the favor of those "faceless global corporations." Yes, many of our economic lives depend on the function of those corporations because we've invested in them and their downfall means the downfall of the entire economic system. But that is not the only way to live--we may have reached the point in civilization where turning back to a life not run by the stock market would be catastrophe and utter chaos, but living with such realiance on the economy that we have today is not the only way to live. The alternative may not be pretty, but it may be necessary. I don't believe I have enough evidence to support that on my own because, like I said, I'm not an expert on economics. And perhaps I shouldn't even bring it up because I will most likely lose the battle on that discussion at this point if someone chooses to pick one with me (but, hey, it's Blog Action Day and making statements like that creates dialogue and that is precisely the purpose of posting about climate change all over the planet!). But there are people out there who get how economics work and can explain why the way we're living isn't going to work. We can't keep this culture and economic system and survive or continue to live on Earth. We certainly cannot have rainforests and biodiversity and keep our culture at the same time; that much is definitely clear to me. Dr. Barry (the guy who wrote that excerpt up there) puts it this way and I had thought the same exact thing before even reading his article: we cannot have our cake and eat it too.

I realize some of the things I'm saying may sound naive. However, I'm not making them up--I have a reason for saying them. The evidence is clear to me, even if I can't articulate the facts clearly. I haven't studied this stuff in detail; I've just heard the argument and it makes sense to me. I first read about it in What We Leave Behind by the passionate and honest writers Derrick Jensen and Aric McBay. I bought their book at Bound Together, an anarchist bookstore on Haight Street in SF (no I'm not an anarchist in case you were wondering...I just happen to have a weakness when it comes to bookstores), but I also saw it on the shelf at Borders, so people who avoid anarchist bookstores can read it, too. Let me warn you, the book is not G rated in all its content, BUT what they are saying needs to be heard and given some thought. I'm not saying I agree with everything they say, but I definitely think they have many valid points that have not been adequately questioned or addressed--similar to Dr. Glen Barry's article. 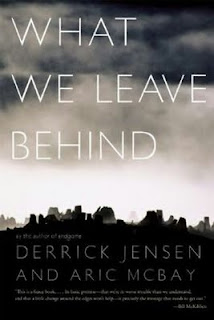 Now for the fun part--discussion time!
If you've read this post, please let me know your thoughts. I think the most important part of Blog Action Day is the discussions it raises. I want to know what you agree with, disagree with, think is insane, crazy, legitimate, etc. Add something to what I'm saying or at least let me know what you think.