October 10, 2009
I have found that walking can slow down time, force you to live at a slower pace for a bit and make you aware of your surroundings. Driving is so fast and so much about what's next, where you're going, how fast you can get there. Walking is about the journey, or at least it lends itself to be.

I've been walking to and from school when I've had time and it's a lovely mode of transportation when you can slow down and appreciate your environment. Part of my walk home takes me through a park which I have been in thousands of times but have never truly slowed down to appreciate. When I ride my bike, I have hardly enough time to appreciate the sunlight on the leaves, the curve of the paths, the bark on the various trees or the hills and dips of the grassy knolls. Walking offers you quiet time to think and observe. It creates a sense of place. 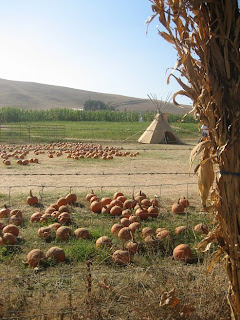 Fall 2006, A picture I took at the local pumpkin farm.
Reduce Footprints's Change the World Wednesday challenge for this week was to take a walk and pick up trash. I planned on going on Sunday to the creek to pick up trash there, but my sister doesn't want to venture down there in the morning. So instead, my sister and I went on a walk through the park with the intention of picking up some of the autumnal-tinctured leaves on the ground, and perhaps collect any trash we found along the way. My step-mom asked us to also go to Safeway, which is just across the street from the park, and we agreed.

My sister scootered and I walked and we stopped every once in a while to pick up leaves. I threw away a Ring Pop someone had left on the sidewalk and then we came across a note attached to a piece of ribbon attached to a tree branch. We read it. It was part of a invitation to take someone to the upcoming Homecoming dance at my high school. I started to pull it off of the tree branch to throw it away, but then realized that the clue may not have been read yet and the surprise invitation not yet completed. I left it on the branch so it wouldn't ruin the fun. At one entrance to the park was a popped balloon and the first clue for the invitation. I pulled the poor balloon from its place around a light post and stuck it in my bag to throw away later.

Safeway had some really neat, warty-looking pumpkins...I just looked it up and it seems they may be called "Super Freak pumpkins." My sister and I decided we want to buy local pumpkins rather than from Safeway this year. We don't even want to buy those cute little baby pumpkins from Safeway. Yeah for locally-grown pumpkins! I think it also would be neat to make food out of the pumpkins, like pie or bread or toasted seeds. We never have and it seems like such a great opportunity to make something yummy and such a waste not to. 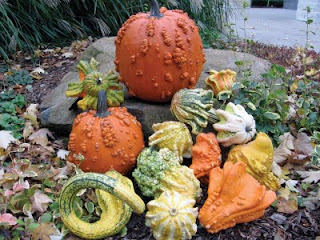 After leaving with our reusable bag filled with ingredients for our calzones tonight, my sister and I walked back toward the park. Growing between the curb and the asphalt was a green plant, choked with fallen leaves around its base. I pointed it out to my sister. "Life will find a way," my dad put it when he encountered a similar flower growing up through a crack in the street when my sister was still in the hospital. We continued our walk home. My sister picked up a pine cone and we both picked up more fallen leaves. I found a discarded Starbucks straw (grr...straws...) and picked it up to throw away at home. Our walk ended with a bag full of fall leaves, one pine cone, ingredients for dinner, and two pieces of trash. Okay so we didn't exactly clean up the world--at least we enjoyed the autumn air and afternoon sunlight.

Earlier today, I did continued research on the uses of aloe vera, yarrow and willow. I'm participating in a Halloween event at the nearby Alviso Adobe Community Park. I will be dressing up as a Native American medicine woman to teach attendees (mostly children) about the medicinal uses of various plants to show that it isn't witchcraft that gives these plants the abilities to treat illnesses. The event is being put on by the City Naturalist, Eric Nicholas. It's the first year this event is taking place, so my role in it is not set in stone and can be as elaborate as my imagination makes it. I'm creating a script or general outline for my presentation that will be used in future years. It's a fun experience and I'm excited to come up with more ideas.

My step-mom, sister and I ventured downtown this afternoon for lunch. I went into the local bookstore to speak with the owner about an upcoming Neil Gaiman party they're putting on relating to his book, The Graveyard Book. As a child, Coraline was my favorite book, so I am excited to read Gaiman's new book and help plan and participate in the Halloween party. After all, Halloween is my favorite holiday...perhaps its the actor in me that enjoys dressing up and being a part of the huge production that is Halloween night :)

We also went by the American Cancer Society Discovery Shop to look for some decorations for my "witch's kitchen" display for the Alviso Adobe event. I found two perfect decorations and a book of holiday crafts--including Earth Day crafts! I will post pictures if I make any of the Halloween crafts sometime this month. It looks like it will be a very fun way to celebrate holidays throughout the year. 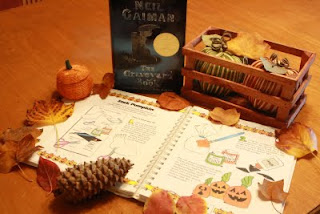 Sometime before the event I hope to find time to go down to the creek and harvest some bay or eucalyptus leaves for the Alviso event. Eric told me how to harvest them, so I hope I am able to correctly identify some trees and collect some leaves.

I've been thinking about what to write about for Blog Action Day October 15. This year's action day is all about climate change, so I'm looking forward to participating in this world-wide blogging day! I have been talking to my friend who's from Denmark about the way the environment and climate change is viewed there, and I do have some idea of what I'll be writing about. If you have a blog, you should really consider participating. It doesn't take a lot, just one post relating to climate change on October 15.

Have a great weekend!
Green Gal

Ask who keeps the wind
Ask what is sacred.
-- Margaret Atwood