Biking to SoFA for West Side Story

August 20, 2015
Last night, Green Guy and I biked into downtown San Jose, leaving our tree-lined neighborhood for the big tall buildings across the freeway. Though we've lived here since the beginning of June, I am still always blown away when I see those high rises right downtown, so close to where we live and yet such a different part of this city.

We biked downtown in search of City Lights Theater Company, a small theater in the SoFA District of San Jose. SoFA as in South of First Area, which the San Jose Downtown Association's website states "serves as downtown San Jose’s visual arts and entertainment district. Cool, organic and creative, SoFA is a place where you can interact with some of the most eclectic and artistic people in the city." We saw and heard evidence of this in the form of various small theaters, as well as the sound of music and dancing footsteps emanating from a doorway we passed on our way. I had actually read about this area and its music scene in the local Silicon Valley weekly Metro magazine, which I read each week cover to cover while waiting for the bus. Metro is also where I had read a review of West Side Story, the production we were headed to last night.

Before we set off on our bikes to see the City Lights production of this iconic musical, we had made a dinner of leftover crockpot ribs and freshly baked homemade pizza with store-bought dough, bell peppers, mushrooms, onions, arugula, and of course bacon. (Sorry, the ribs and bacon aren't the greenest option around, but we're working on eating more veggies than meat.) Over dinner, we had considered driving to the show because we didn't know if there would be safe or adequate bike parking. After looking up directions to the theater, we realized we'd feel silly driving since it's so close, and we had made an agreement that we would bike as often as we could in lieu of driving. So we biked there, bringing plenty of lights and bright clothes for the darkness after the show.

When we arrived in the SoFA area, we were excited to find a parking space that had been converted to a set of bike racks (some might call it a parklet). The racks are shaped into the form of a car, and I imagine that when full, it's a wonderful visual of how many more people a car parking space-sized bike rack can serve compared with a parking space for a single car. We locked up and walked over to the theater, just around the corner. 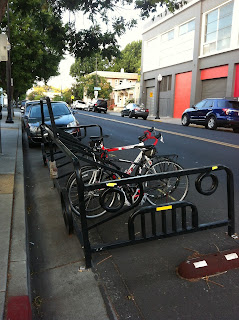 The minute we walked into the small theater, I was brought back to my days as a theater kid at in the Tri-Valley area, where I performed with Imagine Performing Arts and my high school drama program. I haven't performed on a stage for an actual production since high school, though I did play King Lear in a one-scene production for a theater class my freshman year of college (I had the whole hair-tied-under-the-chin beard look going on for that one). From eighth grade until senior year of high school, I had performed, directed, and helped with tech for countless plays, musicals, one acts, and improv shows. Before that, I was a San Francisco Shakespeare Camp camper for six years. When other kids played sports, I did theater. And I miss it.

Seeing a cast of young people my own age on stage, recreating the story of star-crossed lovers that humans have performed, read, and retold for centuries, made me yearn to be on stage again. It's been so long, though, that I wonder how much of my acting skill remains. I still stand up in front of people for teaching, public speaking, and trainings I lead at work, and in some ways those experiences are mini-productions in themselves, but I haven't memorized lines or developed a character or been a member of a theatrical cast in five years. It's easy to convince myself that I'm just too far beyond my theater days to get back into it. (Wow, writing that makes me feel old!)

But I know that even if it feels insurmountable to audition for a show or find a place in San Jose where inexperienced or out-of-practice actors can perform, I should still try. There's no reason not to, and I know I'm not the only person who's ever taken a five year break from theater and wanted to get back into it. In fact, I read the biographies of the actors in last night's show, and it said that the actor playing Lieutenant Schrank was returning to the stage after a twenty-nine year hiatus during which, interestingly, he was a sergeant with the San Jose Police Department. Twenty-nine years! And I'm concerned about five years? I'm on the lookout for opportunities to rekindle my inner thespian, and if you know how one jumps into the community theater scene in the Silicon Valley area, please let me know.

But enough about my aspirations to stand once more under the stage lights! You might be wondering how the production was last night, right? Well, if you clicked the link above to the West Side Story page on City Lights website, you would have noticed their announcement at the top of the page that the show is completely sold out for the rest of its run, which goes until August 30. So that's saying something, and I'm not surprised that word got out about this fantastic show with a stellar cast of actors, dancers, and singers who bring the well-loved music, dance numbers, and classic tale to life. 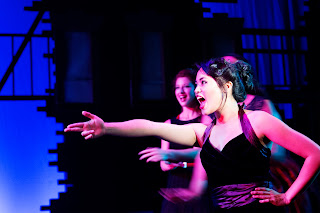 I'm no theater critic, though in high school drama we had to write production critiques each semester, so I know how it works. But I honestly hated writing production critiques, so I'm just going to say what I loved about the show since this is my blog and my old drama teacher isn't grading this. And you can't get a ticket anyway since it's sold out, so my review probably won't be the basis of a decision to see the show. There is a wait list option, though, so if you really want a chance to experience this production, you may be able to.

I think my favorite scenes in this particular production were "Gee, Officer Krupke" and "America" because the actors who aren't in main character roles had a chance to show their talent. "Officer Krupke" is probably my favorite song in the musical, and these guys just nailed it. Absolutely hilarious and well-performed. "America" for me is one of those songs that gets stuck in my head all day but I'm kind of okay with it, and the ladies in this cast did a fantastic job. "Ay-Ay-Ay!"

As someone who's seen the film version, at least two other live productions, and who owns a vinyl record of the soundtrack, the familiar music and singing is always a delight to hear. On the bike ride home, I couldn't help but hum and whistle the tunes, trying not to belt it out since it was late and we didn't have the enclosure of a car to keep our sounds from reaching sleeping people in their homes. I even set my iPod-alarm clock to play music from the soundtrack to wake me up this morning!

Although the male characters' voices in this production were sometimes stretched to hit the notes on particular songs, overall the singing was beautiful, especially the women! Maria (Katherine Dela Cruz) and Anita (Danielle Mendoza) had incredibly strong singing voices. I think the strongest male voice was Riff (Josiah Frampton), though each of the male actors had at least one song where they could really hit the notes. All in all, it was a lively, well-performed show, and I really enjoyed the venue and set. 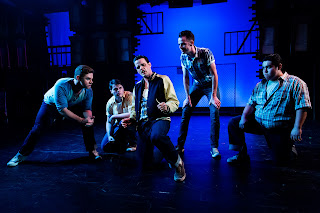 Of course, West Side Story has some problematic elements that are more obvious to me now that I'm older, such as falling in love on the dance floor and the next day being kind of okay with your new boyfriend killing your brother. And the pro-American, anti-Puerto Rican aspect of songs like "America," which, granted, are in some ways challenged by the unfolding of the story later on. I also noticed that the demonstration of the really horrible dark side of the Jets in the rape/sexual assault scene with Anita at Doc's paired with the "Gee, Office Krupke" song leads one to wonder if audiences are supposed to forgive or sympathize with the Jets because they're "psychologically 'distoibed.'" I won't get into these topics here, though, because I haven't really thought through them beyond what I just shared. I'm sure others have blogged about them or written entire essays on the subject if you're curious about this topic.

Well, I've written more than I intended to this morning already, and it's time to get to work. I'm grateful to have had this bus ride this morning to share these thoughts. It's been so fun to get back into writing on here, so thank you for taking the time to read this reflection on my evening. Let me know what you think in the comments!

Until next time,
Green Gal