November 20, 2013
Imagine the UC Santa Cruz campus without cars or buses circling its horse-shoe shape. No cars driving up behind the sea of pedestrians on Steinhart Way, cramming people off the road or forcing people on bikes to give room to the large metal isolation machines (commonly known as cars) that keep people separate from their fellow slugs. Think of the roads that could become walkways and bikeways (as Steinhart really is and should be since only authorized vehicles are allowed through), people reclaiming space and not having to stop and let cars and buses pass when crossing guards are directing traffic. No bus pollution right in your lungs as you bike up Hagar behind a Metro or loop bus. Walking and dancing in the street, more people walking through forest paths instead of busing around campus, bikes zooming around instead of rusting in a sideyard. Healthier people, healthier air, more human powered transportation. 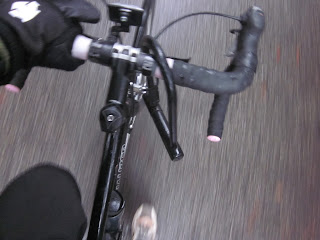 Today, while biking through rain and fog up the bike path and around Porter and then through the middle of campus, it wasn't difficult to imagine this vision of a car and bus-free campus reminiscent of Santa Cruz Open Streets. With the strike activity at the base of campus, only a few cars are roaming around on campus roads, and everyone is either off-campus or in their dorm. If they are out and about on campus, they're walking or biking through the rain to attend a class that managed to still happen, go to the dining hall, or visit the strike activity.

Roads are pretty empty, especially compared to a typical rainy day. Normally, rain freaks everyone out and they cram onto buses or drive to campus. (Little do they realize how wonderful being slightly soggy after a rainy bike ride can be!) Rainy days are usually crowded traffic days, but since no one's here today, the streets are empty, except for the rain and wandering deer. 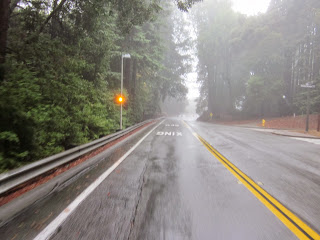 I realize that buses and cars are sometimes necessary to access our hilly campus. Not all people have the physical ability to walk or bike to campus, though many who think they don't have this ability would be surprised to find out they do if they tried. Sometimes we transport things that require more space than a bike can handle, and most people don't own bike trailers (even if they maybe should). Also, when we're sick or hurt, the bus and car are solutions to still get to campus without jeopardizing our health.

With those limitations expressed, however, visioning our campus space without (as many) buses and cars is fun and actually opens the door for the mind. Imagine how the spaces we currently have on campus could be better used to support walking and biking so that people who are capable do so voluntarily and not just when there's a strike.

One really obvious thing I realized while biking up the bike path is that there are no designated walking paths to reach the west side of campus. To get to the east side, there are shoulders along Coolidge and a sidewalk near the bus stops followed by a path parallel to and separated from Hagar Drive... but the only clear path to the west side of campus is the bike path, which is technically closed to pedestrians. On days like today when the only way up or down the hill is walking or biking, many people use the bike path for walking. As a person on a bike heading uphill and having to breathlessly squeak "on your left" to a group who has taken over the path, my first impulse is to inform them that they aren't supposed to be on the path. I always catch myself before I say anything, of course, because at the end of the day, I love that they are walking and not busing or driving. What I'm really feeling is a need for a designated pathway for them to use so that they are safely out of the way and I don't have to swerve or slow down when I'm in the groove of biking up to campus. I've met other people who bike to campus and get angry at pedestrians on the bike path, so I know that people walk it often and that there is some resentment from people on bikes who see the sign at the top and bottom of the hill and do not expect to be swerving around pedestrians. This solution seems so simple--just widen the non-grassy area to the side of the bike path and indicate at the top and bottom that pedestrians are to remain to the side of the bike path.

Another thing that's interesting to think about is what we could do with all the parking spaces that could be vacant if fewer people drove to campus. This isn't my idea--it's been done at other universities and cities on a temporary basis and was mentioned this morning at a meeting I attended off-campus. The event others have done is called (Park)ing Day, and the description on the event's website states:

(Park)ing Day is an annual open-source global event where citizens, artists and activists collaborate to temporarily transform metered parking spaces into “PARK(ing)” spaces: temporary public places. The project began in 2005 when Rebar, a San Francisco art and design studio, converted a single metered parking space into a temporary public park in downtown San Francisco. Since 2005, PARK(ing) Day has evolved into a global movement, with organizations and individuals (operating independently of Rebar but following an established set of guidelines) creating new forms of temporary public space in urban contexts around the world.The mission of PARK(ing) Day is to call attention to the need for more urban open space, to generate critical debate around how public space is created and allocated, and to improve the quality of urban human habitat … at least until the meter runs out! 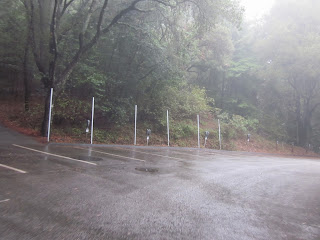 With fewer cars on campus and some lots empty (like the one above near McHenry Library), this kind of project could engage students, staff, and faculty walking by in thinking about how we can better use spaces in our community on campus and turn them into places that have meaning and purpose beyond simply being a place to store your giant hunk of metal transportation when you're on campus. There are so many reasons not to have a car-centric campus and community, and opening spaces up in communities to convert them from parking spaces to something more community developing and inspirational is one reason that people don't often think of.

I've been pondering transportation and its relationship to my life, social justice, sustainability, and other topics lately, and I've been working on a blog post for awhile about my transportation history. I will post it soon and perhaps it will better frame the context that I'm coming from in writing this piece about rethinking our roadways and transportation-related places on campus.

I want to also say before I end with some more photos that there's an entire other blog post that could be written about how the strike and these reflections are related, how lack or limit to access to transportation and access to education and access to fair wages are part of the same systemic problems that are a huge challenge in our community, culture, and world. I promise reflections like that will come soon, and even if it takes awhile for those reflections to be written and posted here, they are brewing strongly in my mind and I've been sharing them with people I see day-to-day.

I rode around and took pictures on my way back to my dorm today... There were not only empty parking spaces but also empty bike spaces, as seen below. 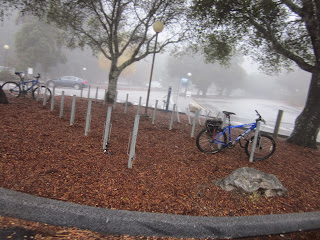 ﻿
But the Bike Co-op (sandwich board sign below) was one of very few entities open today on campus, and it made me smile because I knew that the people running the co-op today must have biked up the hill or live on campus. The more full bike rack in the back of the photo was cool, too. 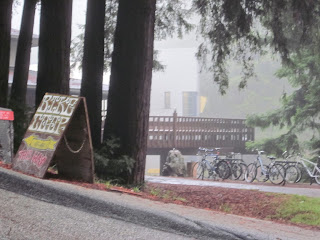 And this last photo is me when I returned to my dorm covered in rain water, my hair frizzing and curling, and my spirits high. Biking in the rain is fun! I can't wait to bike downtown for sushi tonight with Green Guy--I hope the rain is gentle on us when we bike back up the hill to this city on a hill that I call home! 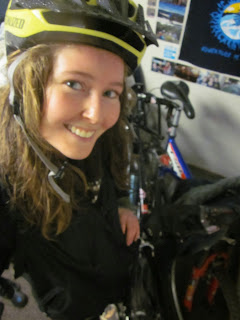