July 26, 2013
Here is an assortment of random facts and thoughts on nature that I've learned so far this summer at camp:

Capturing Animals as Pets
You never want to capture and take home with you an animal or insect or fish from nature to make your pet. Each has its own role in that habitat, so to remove it makes it harder for that ecosystem to thrive and harms the animal you're removing. If you want a pet spider or snake, look for captive-bred animals, not live-bred animals because this means the animal you're getting was not taken from its natural environment but was raised in captivity from birth.

Another thing to realize is that putting sticks and leaves in a jar does not recreate a habitat. Ecosystems are diverse and full of organisms big and small that animals and insects depend upon. Observe and learn from animals in their habitats, but leave them be. If you really love them, leave them.

Baby Snakes are More Poisonous than Adults
Fortunately, I didn't learn this from experience or observation, and it's important and interesting to know. A lot of energy is required for a snake to create poison, and they use this poison to digest food, so they really avoid releasing poison when biting if they can help it. But baby snakes haven't quite mastered the ability to distinguish between something they want to kill and something they simply want to scare off, so they release poison every time they bite. One should always be aware of the creatures on either side of the trail and leave them alone to avoid danger, but if you see a baby snake that might be poisonous, be especially sure to steer clear and do not bother it. 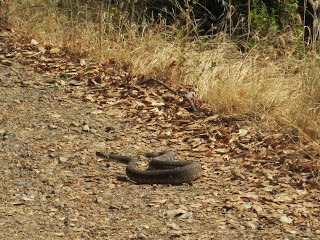 I took this photo of a rattlesnake on the trail one morning. Fortunately, it didn't demonstrate its venom releasing abilities, but I'm sure it has 'em! It's rattle certainly was telling us so.


Murphy's Law Applies on the Trail, Too
If your backpack has electronics in it and is really heavy, crossing a water obstacle means it might (read: will) land in the water. Pack carefully and put all electronics and sensitive objects in sealed ziplock baggies when you aren't using them--and especially when crossing water! This one I did learn from experience, but fortunately my backpack was waterproof enough that nothing was damaged and the camper who passed it only got slightly soaked... up to his neck... Maybe I should pack lighter for camp...


More facts coming your way next Friday! Thanks for reading!