February 21, 2012
Earlier this afternoon, UC Santa Cruz student leaders from a unique selection of campus groups gathered in the Stevenson Event Center to talk about sustainability, environmental and social justice, democracy, the green economy, and the future with a "globally recognized, award-winning pioneer in human rights and the clean energy economy," Van Jones. There were students in the room with a variety of different interests, but all were drawn to the event by the promise that Van Jones would be an inspiration to hear from and speak with, and at least in my opinion, that promise was fulfilled. But before I go into what he said earlier today, let me share a little about Van Jones. 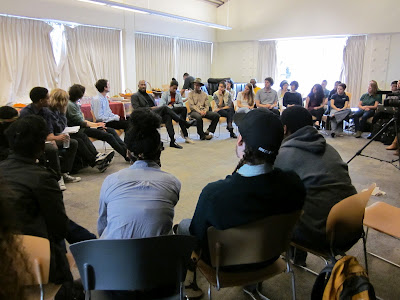 He is the best-selling author of The Green Collar Economy and served as the green jobs advisor to President Obama. He is currently a senior fellow at the Center For American Progress and a senior policy advisor at Green For All... Jones is the founder of Rebuild the Dream, an engine helping to drive the movement to renew the American Dream. They harness the power of media and technology to mobilize, organize, and broaden the base of people working to fix America’s economy and restore our democracy. " (UCSC News & Events).
Van Jones was invited to speak at UCSC in celebration of Black History Month through a collaboration between the UCSC African American Resource & Cultural Center; Cultural Arts and Diversity Center; American Indian Resource Center; Student Environmental Center; Education for Sustainable Living Program; Friends of the Sustainability Office; Brain, Mind & Consciousness Society; and Engaging Education. Thus, the students at this afternoon's luncheon were from these groups.
Upon first reading this list, it seems a little strange to have students from ethnic resource and diversity centers coming together with environmental organizations, and to have those groups coming together with groups whose interest is the mind, consciousness, and education. Aren't those three separate types of organizations? Why would they be interested in working together, and what does Van Jones have to say that will be of interest to all of these groups?
Around 1 PM, Van Jones began speaking to the group of students who had gathered, some of whom had shared what group they were with and what work they do on campus. Snacks had been served--fruits, vegetables, tea with reusable glass cups--and everyone was seated in a circle so that everyone could see one another. After a man who works with the American Indian Resource Center had reminded the group that in discussions about America and democracy, it is vital that we don't forget the first people who lived on this land, Jones started his discussion with a breakdown of the different "waves" of environmental work that have taken place over the course of history.
The first era, he said, was an era of conservation. When we think of "conservation," our first thought is Teddy Roosevelt and the protection of National Parks and other natural features in the United States during the twentieth century. But going off of what the man from the American Indian Resource Center had mentioned, the era of conservation in America began 10,000 years ago with the conservation efforts of Native American people, leading up until the colonization of the U.S. The pristine beauty of America at the time of colonization was a "deliberate expression of a worldview" that sees all nature as sacred and worth protecting, Jones said. Bird migrations used to sound like thunder. Trees used to extend from the Pacific coast to the midwest. Nature used to thrive in abundance.

The second wave of environmental work began with Rachel Carson's Silent Spring, which raised awareness that "it is not just creeks and critters" that must be protected: it's also people. The use of "poison on the ground to grow food" was not regulated, so the government stepped in and created laws. Unfortunately, with regulation came not environmental justice, but social injustice; the regulation moved the pollution and poisons to poorer communities, communities where people of color lived. A society that had experienced racism for so long turned environmental regulation into environmental racism. From these issues stemmed another wave, that of environmental justice in the 1980s.

Jones discussed that these two waves--conservation and environmental justice issues--have been divided along lines of race since the beginning and that this needs to change. The conservation movement is often considered a "white man's" movement, and the environmental justice and equality movement a movement of "people of color." The way I understood this was that those who have historically (since the time of Teddy Roosevelt's conservation) had the means to visit places like national parks and have time for outdoor recreation have been wealthier people and typically white. Of course, this is not true of all people who visited the outdoors, and it certainly is not as true today, but those, like Teddy Roosevelt and Rachel Carson, working toward conservation have often been white people. On the other hand, those affected by the pollution and degradation in poorer communities have typically been people of color who may not have the resources to visit national parks and develop a sense of relationship with nature, and thus issues of racism and inequality in the environmental movement have largely been spearheaded and supported by people of color. Again, not the case for all people and this has changed over time.
The most interesting thing about this is that before the colonization of this country, the American Indian people here were the conservationists. Before the colonization of Africa and introduction of the slave trade there, the African people were conservationists. When white European imperialists came to America, they stole the land and told the people there that the land was not valuable in itself and that it should be sold: "That isn't a tree, that's timber." The people who respected the land were "pagan, heathen, worshiping nature," just as the "witches" in Europe who respected nature and saw its healing powers and beauty were burned for their "pagan" beliefs. The African people who encountered imperialists also believed in the sacredness of their land, but they too had their land stolen from them. Jones pointed out that with African American racism issues, people tend to focus on the stolen labor issue, but it's also a matter of stolen land. Many generations later, the children of the colonists and imperialists are turning back to the American Indians and African Americans and telling them that they should protect the environment, that we do need it, and that nature is not simply something to be sold.

But according to Van Jones, many people of color don't want to deal with the "white" stuff of conservation, even though it was their ancestors who told the colonists the same thing the colonists' descendants are telling them now. It's collaboration like the collaboration that happened today that needs to take place for these issues of environmentalism and equality to come together and happen. Without one, you cannot have the other.

The newest wave of environmental work is innovation, which combines conservation and regulation. It isn't just preventive, but creates solutions and new ways of solving issues. This new wave is our generation's challenge, and it can only be achieved through the collaboration between the various groups working in the environmental movement, for conservation of our planet and for justice for all people. 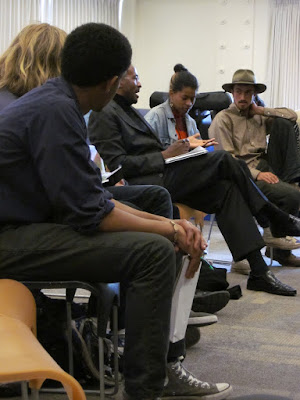 After this discussion, students asked questions and Van Jones responded, referring to his book and his work in the White House. The take-home point that I got from the whole conversation this afternoon was that working together between organizations is not only necessary, but opens up possibilities that we cannot foresee. Jones recommended that at least once a quarter, we collaborate on an event together to bring us all together for collaboration.

He reminded us all this afternoon that we must be patient because the kind of work we're doing takes time. We must collaborate and realize that our goals and aims are not that much different, and that in fact, they require each other in order to be fully achieved. We must create a "green wave to lift all boats."