February 26, 2011
At nine o'clock this morning, I put a pair of binoculars around my neck and stuffed a small red notebook into my pocket before setting off with a group of four other UCSC students led by UCSC Museum of Natural History curator Chris Lay. I had signed up for this Natural History of the UCSC Campus one-day class last quarter, but it had been cancelled due to rain. Today, even with the threat of snow, the class was still on. It was chilly but fortunately not raining as we set off from the UCSC Recreation Department toward the East Field.

After introductions, Chris asked if there was anything we particularly wanted to see. An environmental studies major named Shannon, who I talked with throughout the hike, said "any mammals other than deer and ground squirrels." We all laughed because moments before we had seen about 25 ground squirrels on the hill by Stevenson College, and deer are ubiquitous throughout the campus. Chris said he hoped today's hike would take us places we'd never before explored on campus; it turned out I hadn't been to the majority of the places we walked to.

The first natural history sighting we had was a Say's phoebe on a fence post (my handheld camera is broken, so I wasn't able to take any pictures from today's hike, hence the photos from other sources. Each photo is linked to its source.) 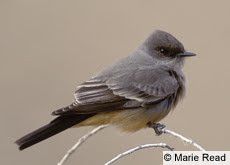 Chris told us that this bird is a fly-catcher, venturing from its perch to catch flies and bugs with its wide, pointy bill and then returning to its perch. It has a dark head and a yellow-brown underside, and its call can be described as "whiney." Chris remarked that they are often found in open areas, like the meadow east of East Field where we spotted it. The "binos" (birding lingo for binoculars) were a necessity on the hike. Without them, most of the creatures we saw would have been distant dots. My eyes are definitely not trained for spotting birds in the distance, so it always took me a few seconds to determine where to look.

In the same meadow, we also spotted a male Anna's hummingbird performing an intimidation display. It flies straight up, really high, and then dives down in a j-curve. A "zoop" noise at the end of the dive is created by its tail. This hummingbird, one of two found on the UCSC campus, lives here year-round.

Our next sighting was flora. Non-native, weedy wild radish, of the mustard family. Interestingly, this plant's flowers have four petals and six stamen, unique to its family. It has purple, yellow or white flowers and tastes a little like cauliflower. 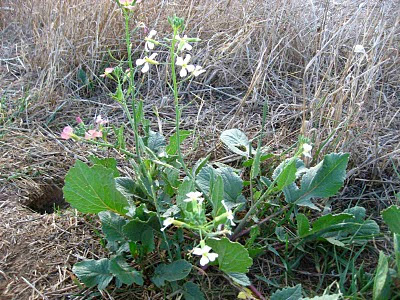 We continued down the meadow until we came to a gash in the ground, where it looked like the earth was sinking into itself. It was, actually, because it was a sinkhole, one of many found on campus. We ventured into it. It just looks like a depression in the ground, but upon closer inspection, a hole covered with rocks can be seen, no bottom in sight. Sinkholes are not common in most topography. When it rains in a normal valley, the water drains down through the valley by creek or river. In a sinkhole, however, the water just goes through a hole in the ground, like a bathtub drain. There's limestone underneath the whole campus, which was created in the ocean a looooong time ago from the buildup of dead organisms. The San Andreas Fault line, about 10 miles east of us, is bent, and so there is sliding and pushing; because the two sides of the fault are of the same density, this fault created the Santa Cruz Mountains. The limestone under the campus contains calcium carbonate, which is dissolved when water runs over it. When it rains, the water dissolves the limestone and carries it away toward the ocean. Some rocks that had been piled into the sinkhole were put there because, as Chris said, "they don't want it to eat the East Remote Parking lot."

There are sinkholes all over campus, creating a honeycombed rock layer under the soil. When Chris brings a geologist out to this sinkhole with his 2-unit Natural History of the UCSC campus class, the geologist says that he doesn't walk over sinkholes because of their potential instability.

Chris talked about the various sinkholes and caverns around campus that most students don't know about. McHenry Library has been worked on for years; it's supposed to reopen this summer. One reason for this prolonged construction is that when they went to reinforce a corner of the building, they found that there was nothing to reinforce it with: the earth had sunk away from the building. Science and Engineering Library is bridged across a cavern. J Baskin Engineering was built on stilts because of its proximity to a sinkhole. This topography also accounts for the many caves on campus, including the well-known Porter Cave, which I ventured into my first evening on campus.

As we traversed meadows in lower campus, I silently was thankful that I'd chosen UC Santa Cruz over another school like Davis. UC Santa Cruz has the coolest natural history! So many things to discover and so much biological diversity. I'm definitely signing up for Chris's 2-unit Natural History of UCSC winter course next year.

While standing in East Meadow, Chris mentioned how California grasslands have been infiltrated with non-native species over time, due to the introduction of cattle in the 1850s and exotic grasses. I had pointed out plantain to Shannon earlier, and we'd each tasted a leaf. She asked if plantain was native, and Chris said no.

We crossed the road and wandered near the Village and the Farm. The Village is located in an old quarry. The campus grounds had many uses before UCSC was established; originally, of course, it was the home of the Ohlone (I'm hesitant to use this name because I've been researching local Native American tribes for a research paper I'm writing on missionization, anthropology and the effects of colonization of this area on the ability of local tribes to become federally-recognized, and Ohlone was a word created by anthropologists...it's better than "Costanoan," and it is generally acceptable by the local tribes, but I still feel a little iffy using it to generalize the original inhabitants of this land). Seventy-five to 100 years ago, limestone quarries were created on the campus grounds. The limestone was burned to extract the lime, which was used in concrete and other things. To burn the limestone, they clearcutted the redwoods for fuel. The trees reforested themselves, but in the large meadows on campus, stumps were removed for grazing. (The Ohlone used to burn meadows in order to clear out brush for easier hunting and so that native plants would grow with the fertile soil.)

We passed a bay tree and each of us grabbed a leaf and crushed it in our hands. Chris told us that bay tree leaves are related to the bay used in cooking, but that they are much stronger and shouldn't be used in that way. Bay tree leaves are particularly pungent, and something about them causes extreme reactions in certain people.

Up in the sky, we noticed a white-tailed kite, which was kiting, or stopping midair by flapping its wings to look down on its prey (think of a kite standing still in the air). Other birds can kite, as well, but kites don't need the stiff wind others need because of its unique shoulder joints. It's related to the hawk. 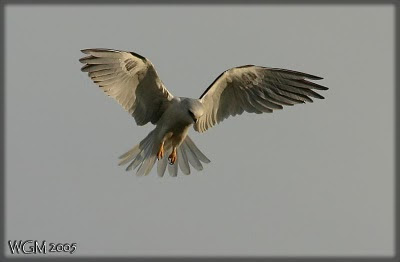 Near the Village, Chris pointed out a patch of wild radish. Beside it were some native grasses, then a patch of mud and then another layer of native grasses. On the mud patch were a bunch of little piles of dirt. He cautioned us not to walk over the mud, for it was home to, he estimated, a few 1000 bees. The bees had been hibernating all winter and had come out to get some radish pollen and lay eggs in holes in the mud. After they mate, dig holes, lay their eggs and seal the holes off from rain, the bees die and the babies are born next year. With all the rain we've had, the bees have had to dig themselves out of the dirt, hence the piles. We looked closely and noticed a bunch of bees laying on the surface, unmoving. Chris picked one up. It didn't look like a bee, no yellow and black stripes. It was a solitary bee, meaning these bees are not part of a colony with a queen. The bee wasn't dead, but it was too cold to move around much or fly. To tell the difference between a solitary bee and a fly is that bees have two sets of wings, and flies only have one. The bee has two eyes on the side of its head, as well as three "microeyes" on the top. The bee lay in Chris's hand for awhile and then the sun came out, it warmed up, and it flew away.

We walked through the Great Meadow. I spotted a brush rabbit by a wood pile. It's the only rabbit found around UCSC, and it's a cottontail rabbit, with the white bushy tail. We came across a little alligator lizard under a piece of wood (who was cold and docile until he warmed up), as well as a slender salamander in the defensive posture.

I should really start working on homework, so I will have to shorten my description of the day. On the rest of the hike, we saw: some fungi, a newt carcass, a red-tailed hawk, chickweed, jimson weed, a baby roughskinned newt (which I held! it's cute little hands were fumbling along like a crawling infant), an awesome green Pacific chorus frog, a brown Pacific chorus frog, the mima meadow where crazy, rare mima mounds are found (read about them here!), a coyote, Fremont star lily, a bell-shaped mushroom, Johnny jump up flower, soap root, California buttercups, suncups, and SNOW! It snowed on us as we entered Cave Gulch. The snow was more like snowy hail, but it was incredible! I never thought I'd be wandering campus in the snow at UC Santa Cruz! It was a little chilly, and Shannon remarked when the sun shone through some clouds at one point, "I feel like those bees and lizards when the sun came out!"

By that point, it was already past 12pm, which was when the class was supposed to end. We made our way back to the east side of campus. My notebook is now filled with 9 pages of natural history, and I've learned to identify a variety of different plants and animals. Great way to start off my Saturday!