October 06, 2010
Knowing me and my crazy involvement in clubs last year, it's no surprise that I joined the sustainbility club through Stevenson College, PTAGS (Path To A Greener Stevenson). Tonight was our second meeting of the year, and I have realized that I come back from the meetings with lots of great energy to be sustainable and spread my passion for nature to all the world!

I have homework I should be doing, so if this blog seems poorly-written, it's because I'm rushing! I felt a great need to write a post since I am bursting with so many awesome experiences.

I want to share with you some of the things UCSC does to be sustainable--it's truly a way of life for many students at this campus, which is an inspiring change from the peer group I had in high school. Here's a list of some things that I learned from a handout from the Sustainbility Office...and I added some of my own from my observations:

- All new and remodeled buildings on campus meet LEED criteria
- There's a zipcar program on campus
- The entire campus is one big hiking trail, really, so walking is encouraged
- Students have access to free public transit in Santa Cruz county, and there is a shuttle system on campus to get you from class to class (I try to walk whenever I can...great exercise with all these hills!)
- Native and draught tolerant plants and very few lawns
- Low flow faucets, toilets and shower heads
- No dining hall trays--conserves water and students get less food when they're browsing, so there's less waste at the end of their meal
- Lots and lots of recycling bins
- Organic, local food in the dining halls--I get salad at every single meal, and College 9/10 dining hall has the most delicious guacamole...I eat there every night.
- Compost of food scraps in the dining halls and signs encouraging diners to get only what they'll eat to reduce food waste
- I would imagine it feels worse to litter in a forest than it does to litter in a city. I never litter, but I feel like litterers would feel extra guilty in a forest...

At our PTAGS meeting at 7 PM, we talked about the garden we're going to be building on the Stevenson Knoll, which overlooks the bay. I can't wait to get my hands dirty with Earth! In springtime, I'll be able to take a class that will work on the garden :-) I was just informed at the meeting that UCSC has a Natural History Club...three hours of exploring the campus with Environmental Studies majors, learning about plants and animals on campus? I'm definitely joining! I will be sure to update the blog with pictures and information from my adventures with that club.

In other news, I'm currently writing an essay on The Epic of Gilgamesh (the oldest literary text known to exist, set in the Sumerian city-state of Uruk in 2700 B.C.E.), which I am excited to say has an interesting message about humanity and nature! I had three different prompt choices and actually wrote one essay yesterday, analyzing the epic and the characters from a Jean-Paul Sartre existentialism perspective. I didn't like what I wrote, however, and decided to address one of the other prompts: if the story is relevant to today and, if so, how. Here's an excerpt from the new essay I'm writing:

In today’s overpopulated, urban, consumer-centric world where mankind rules nature and exploits the land for profit, we face consequences of a much greater degree than any other time in humanity’s past. We’ve always been exploiters, changing the land for our benefit and needs. As we’ve developed more and more technologies that require immense resources, and as we grow and spread our species into every corner of our planet, we’ve almost reached our limit of exploitation. It seems that if we continue at this pace of consumption, we may topple into an existence that is toxic, ugly and detrimental to life on Earth.

Living in this world on the potential brink of irreversible environmental destruction, it’s hard to remember that we emerged as a species from the womb of nature. Humans and our hominid ancestors lived similarly to animals for thousands of years before sedentary societies began to develop and technologies allowed us to live more removed from animals and nature. Realizing that we come from nature and that there will always be some part of that nature within us (perhaps both biologically and psychologically), is key, even if we no longer experience Mother Nature as intimately as we once did. When people feel that they are part of something larger, they tend to respect it because it becomes a part of who they are. Their connection makes them want to protect it; for in protecting it, they protect themselves. But once they lose that connection, the lack of emotional attachment to the larger whole removes the sense of respect and need to preserve it. This is what has happened to human society’s relationship to nature, when examined as a whole.

Our relationship with Mother Nature is represented by the character Enkidu in the Gilgamesh epic. When he is created, he exists as a man among animals. In an almost Sartrean existential way, he is awoken to his humanity after sleeping with a harlot from the temple of Ishtar, and he becomes self-aware, leaving behind his prior existence of animal consciousness for the human consciousness which allows him to make decisions toward his future, and create for himself a human essence. He enters civilization, the other side of the spectrum of human existence, which was a relatively newer form of existence at the time the epic was being told. Humans had been surviving in the wilderness and as nomadic peoples in a natural setting for thousands of years before civilizations emerged. Mesopotamian society was just beyond the edge of this transition, and Enkidu represents this. Civilization changes him, removes the wild from him. He and Gilgamesh go on their adventure to destroy “evil,” and end up destroying nature. Like a child betraying a parent, Enkidu destroys Mother Earth when he cuts down the cedar tree, which symbolizes the Tree of Life, with Gilgamesh. Humbaba is guardian of the forest, protector of nature, and Enkidu encourages Gilgamesh to kill him. Humanity has taken away his respect for what he was once a part of, and that says something about the human condition. We exploit; it’s something we inherently do. Sartre would argue that there is no human condition and that Enkidu cannot blame civilization for his actions. Enkidu initially does blame civilization, by blaming the harlot, but then he realizes that he is the one to blame. He dies because of his actions, his betrayal of nature. Almost five thousand years ago, people were aware of this problem. The poet of this epic is warning us of our own issue of exploiting nature from the most ancient literary past that we have access to. That is relevant, and even more so when one considers how long this exploiting has been going on. This is a human problem being addressed in the distant past, and it still follows us today, especially today. It couldn’t be more pertinent to our current environmental problem. Enkidu’s death could be the fate of humanity if we don’t pay attention to the Gilgamesh epic.

This is a very rough draft of the first point of my essay. It will end up being much shorter and probably better written by Monday when I turn it in.

Now that I've used up a good half an hour of homework time, I'll post a picture that I took this morning on my way to breakfast and then say adios. 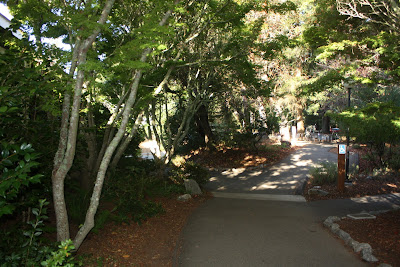 College so far has been the best experience of my life, and I am SO excited to continue learning inside and outside of the classroom.
Thank you for reading!
Green Gal