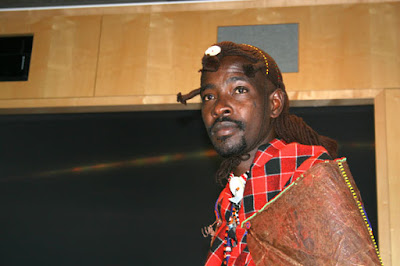 
Today in AP Human Geography, my friends and I presented our end-of-the-year project. We chose the African country of Kenya because my good friend Taylor visited Kenya last summer with her church, so she knew a bit about the culture already. As it turns out, I too know a bit about the culture, having read about the nomadic pastoral lifestyle practiced by many Kenyan people in Man on Earth by John Reader. I also met a Maasai warrior named Sabore and a teacher named Hellen from Kenya at a presentation by Asante Africa at my school two years ago. At the presentation, I purchased a hand-made bracelet and a piece of cloth which is typically worn as clothing. I use it as a table cloth in my room (see it in pictures on this blog post).

Here is the video of Hellen Nkuraiya (see it on the Asante Africa website here):


To prepare for our presentation, yesterday Taylor and I made Kenyan chapati, a type of fried flat bread made of white and wheat flour. We stopped by Safeway after school (finals week means school gets out at 11:40 am), and went to my house to make some delicious food. Taylor later told me that she expected us to fail and that she thought our bread would taste gross. I was a little concerned about how difficult it would be to make it. Here's the recipe Taylor found online here:

Mix the flour in a bowl and add salt and oil. You can mix with clean hands, or use a mixer or food processor. Add a little bit of water at a time and knead well for about 10 minutes until you have a stiff and smooth dough. Cover the dough and let it stand for at least 30 minutes up to two hours. Knead the dough well again and divide it into egg-sized balls. Dust each ball with extra flour. Flatten each ball and roll out thinly into sizeable circles. Heat a heavy skillet or griddle over a medium flame. Lightly grease the pan and slowly heat the first chapatti. Cook on one side for about 1 minute or until lightly brown, then flip and brown the other side. Press the sides of the chapati with a spoon until it puffs. Remove the chapati from the skillet into a warm dish or foil paper and wrap it to keep it warm. Repeat this process for every chapati, wiping the pan with greased paper every time a new chapati is to be cooked. Serve the chapatis warm with a meat stew and/or cooked vegetables. Chapatis can also be served with hot milk or chai. 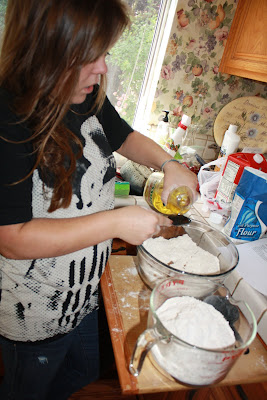 Taylor measuring out the oil


We multiplied the recipe by five to serve the 30+ students in our class. My math skills aren't superb, so Taylor did most of the converting. We decided to mix with our hands, which I highly recommend as it is fun and connects you to the food you are making. It also made us feel more like we were making real Kenyan food because we sat outside on the ground and it felt more real than standing in the kitchen with a mixer. 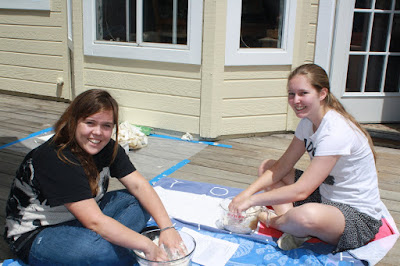 Taylor and I mixing the chapati dough in my backyard 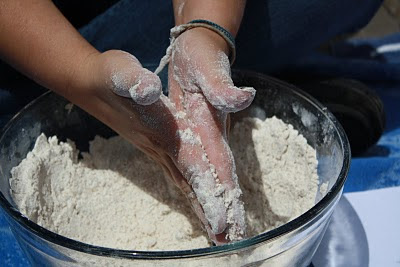 
We split the dough into two bowls to mix, and mine turned out normal. Taylor's had a strange consistency--not unlike tuna fish--so we added more water and flour until it became normal. My sister PawPrint took pictures of us and brought us the water to pour onto the mix. My dog Misty started running around and dog hair was flying everywhere, including into the bowls. During class this morning, my friend Jon asked me if a I have a pet because he found some hair in his chapati. Good thing I'm posting this after everyone ate some and not before! 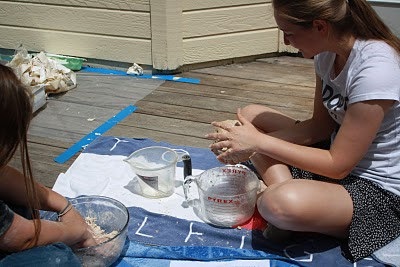 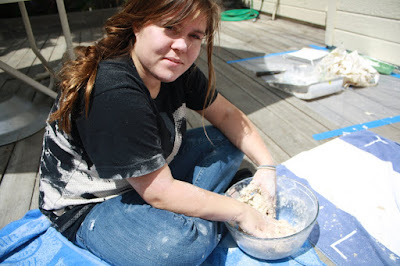 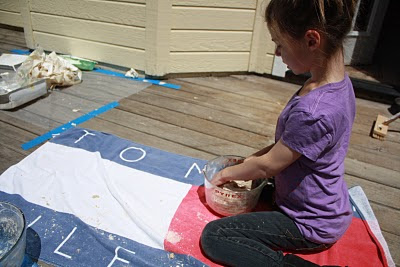 
We let the dough sit for awhile as we made a book for our Human Geography teacher Mr. Bull. His wife is pregnant with their first child, so this year he had the class come up with names for his future kid. Red Bull, Adora Bull, and other names of that nature were definitely brainstormed. So Taylor had the idea to make a book of joke names that he and his wife (Mrs. Turner, teacher adviser for Environmental Club) could have chosen for their son. Mr. Bull promised to send all of his students a picture of his son this summer when he's born, and we're supposed to respond with our AP score once we receive it in the mail.

After a bit, we returned to the chapati and began cooking it in a pan with oil. You can roll the dough with a rolling pin or flatten it with your hands, but we found that the flatter the better if you want to have it poof like it's supposed to. We ate the first one we made and it was surprisingly delicious! 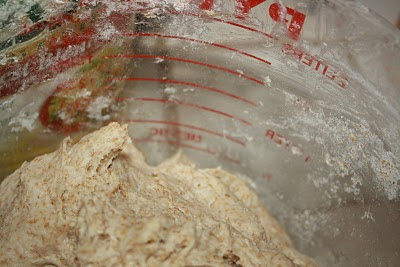 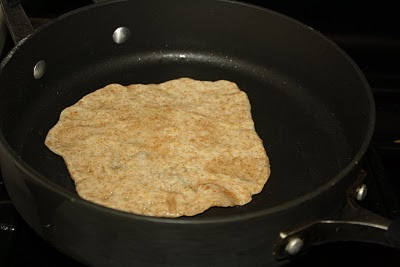 
We learned that adding salt to it as it's cooking makes it have more flavor, and too much oil makes them gross. We cooked the entire two bowls of dough and made enough that I still have some left over after most of my class had one and I ate about four during school. We served it with hot chai tea (we just purchased chai tea bags and brought milk, rather than heat them together), which was also a hit with our class. Our presentation was successful, as well. Being drama students, our group presented a play that explained how we would solve the issue of poverty in Kenya using non-profit organizations and investments from transnational corporations. Taylor showed pictures from her visit to Kenya, and we were able to show off some cool cultural items: my bracelet and cloth, Taylor's Kenyan flag and banner and her spear. We also had a jumping contest, a cultural game that Taylor told us about. Best of all, we succeeded in making chapati! Taylor said it tasted the same as the chapati she ate last summer. I definitely recommend trying it--it would be delicious served with a stew as the recipe suggests. Learning about other cultures and experiencing their food, music and traditions is so fascinating! I guess that's why I'm studying anthropology!

Thanks for reading! Next time I post, I'll be a high school graduate!
Green Gal