Coffee and a green tip

March 18, 2010
Coffee and I have a close relationship, I'd say. This morning, I was a little rushed to get out the door because I was riding my bike and thus had to leave a little earlier than usual, and I didn't have time to make coffee. I figured it would be no big deal--I've gone without coffee in the morning before with no issues. But today, my body knew that I hadn't had my normal routine interaction with coffee and it was mad. So, in retaliation, I got a headache. I guess if I want to go without coffee, I'll have to slowly reduce my dependence on my coffee routine and begin trading in some decaf so my brain doesn't freak out when there's no caffeine.

I was also really tired today after going to bed at 11 PM, which for me is late but for my fellow classmates is early; many of them go to bed routinely at 12, some 2:00 in the morning... I have no idea how they do it. My dad and I had studied poetry and Hamlet after St. Patrick's Day dinner until 10 PM and then my sister and I had to goof off for an hour before my mom finally made us go to bed. So I really should have had my coffee.

I decided to go to Starbucks after school, figuring that because I had endured a ridiculous Stat test with a headache and sleepy brain I deserved a treat. This nice weather we've been having is perfect bike-to-school weather and I rode yesterday and today, so after school I rode my bike to Starbucks and did some homework. But wait, I didn't have my coffee mug because I hadn't brought any coffee with me to school this morning. I had a few minutes of moral struggle about whether or not it was okay that I get a drink in a disposable cup--plastic, since it's hot out and I wanted iced coffee. And then I realized that Starbucks has "for-here" or "in-house" mugs and glasses for people who aren't taking their coffee to go. Aha! Perfect! So now I give you a green tip:

Green Tip: Forgot your travel mug and staying awhile? Ask for a glass or ceramic mug.
"Real" coffee shops, ones that aren't transnational with a mythical mermaid logo, often serve your coffee in mugs or glasses on default and you have to ask for a travel cup. But places like Peet's, Starbucks and other pop culture coffee shops serve you plastic or paper cups so you can take it to go, which makes sense in our fast-paced world of commuters. Most people stop at Starbucks to pick up their coffee and then they head to work or school. Of course they should use a travel mug, but they don't, so these shops supply disposable cups. 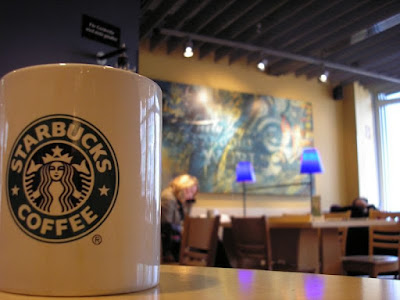 But let's say you're going to be sitting in Starbucks for a business discussion or to read a book or to chat with a friend. Chances are, you'll get a paper/plastic disposable cup, drink the entire drink while you're there, and then throw it away as you leave the store. If you know you won't be bringing the drink with you out of the store, ask for a glass/ceramic mug and then return it when you're finished. No wasted paper or plastic! (Check out this article I just found that relates to this tip!)

I was thinking about this as I rode home: wouldn't it be grand if places like Starbucks had a sign at the register that said something like "Staying for a bit? Ask for a mug or glass instead of a to-go cup." That would be awesome! This tip also applies to those of us who sometimes forget our travel mugs and then are forced to waste resources. If you're going to be there for a bit, get a mug and rest assured that you aren't contributing to a landfill or using up energy down the road when the plastic is recycled.

It wasn't the Exxon Valdez captain's driving that caused the Alaskan oil spill. It was yours.
-- Greenpeace advertisement, New York Times, 25 February 1990