January 03, 2010
If you've ever been to Yosemite, you've probably been to the recreation Miwok village. You've probably seen the displays about acorn harvesting and how the Ahwahnichi lived in the Valley. 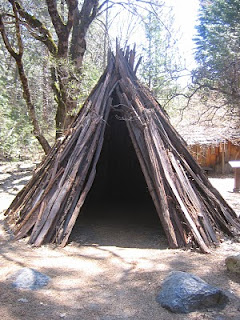 It is a disputed issue between Yosemite National Park and the Paiute people as to whether Yosemite Valley was inhabited by Miwok or Paiute people. The Paiute insist--and have a large amount of evidence to suggest--that the Ahwahnichi of the Valley were Mono Lake Paiutes.

I'm not an expert, but the evidence I've seen points to the Ahwahnichi being mostly Paiute. The photographs the Park posts and label as Miwok are actually Paiute--this is a fact the families of these people state repeatedly to the Park. The Park hasn't listened to them and has instead believed the Park's now-retired ethnologist Craig Bates, who may have been a force behind the eradication of Paiute commemoration in the Park. He changed labels on photos, calling any Native American in photographs at Yosemite "Miwok," when in fact most of the photos clearly show Paiute (clear to the Paiute, not so clear to white people like me or those unfamiliar with the distinct characteristics of the Paiute). When Paiute artifacts have been found in the Valley, Bates would say they must have been traded from the Mono Lake Paiutes--Miwok enemies. Why would the Miwok trade with their Paiute enemies? And if they did, it isn't reasonable to assume every artifact found in the area was traded, especially not with the other evidence that supports Paiute settlements in the Valley. 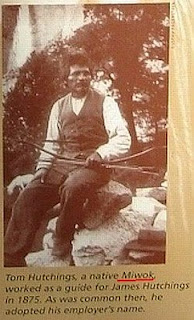 Tom Hutchings, Yosemite's first mailman, was actually a Mono Lake Paiute.
Photographs in the Park's archives that are considered Miwok have missing labels. Found in other places, the labels clearly state "Mono" or "Paiute." The photographs used to recreate the Miwok village behind the Indian Museum were of Paiute homes and people, taken by Eadweard Muybridge in the 1870s. The Park labels the village as "Miwok." 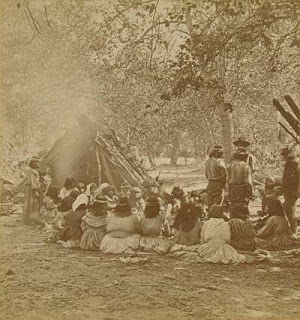 One of the photos taken by Muybridge in the Valley. This shows a Paiute ceremony in which someone is talking to the group. The houses and cultural aspects of these photos were used to recreate the "Miwok" village behind the museum. They weren't Miwok, though, so the village is misnamed.
The Ahwahnichi were forced to leave the Valley after a disease wiped out most of its people. The survivors went to the Mono Lake Paiute and asked to live with them. A man from the Ahwahnichi married a Mono Lake Paiute woman and their son became the famous Chief Tenaya. He married a Mono Lake Paiute woman and had three sons. Fifty years later, Tenaya was told by a medicine man that it was safe to return to Ahwahnee (Yosemite Valley). He brought 200 or so people with him to live as Ahwahnichi once more. He is a hero and respected chief to the Ahwahnichi and Paiute people. Surprisingly, this story is not represented in Yosemite National Park, while it is a very important part of the Ahwahnichi history (there is mention of this story here, although it isn't given great recognition or significance).

Tenaya was 1/2 Mono Lake Paiute and his children were 3/4 Paiute. One of them married a woman who was most likely Paiute and they had a daughter named Maria. Maria is mentioned at the Park, but she is labeled as a Miwok with no mention of her grandfather's place in Yosemite Valley history. To make matters worse, instead of being commemorated as leader of the Yosemite people, Tenaya has been replaced in recognition by Chief Cowchitti, who was an enemy to the Ahwahnichi and helped James Savage and the Mariposa Battalion find them (the Battalion was created to enforce the relocation of Natives to reservations) when Tenaya was reluctant to sign a treaty that would place his people on Reservations. While on his way to the Fresno reservation, some of his people returned to the Valley and were tracked down with the help of Miwok scouts. Tenaya's youngest son was killed in the encounter with the Battalion. They would not have been found if it were not for the Miwok scouts. 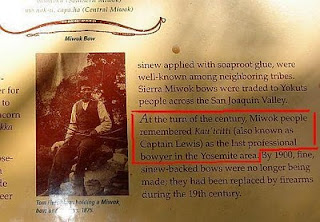 "Sign in Yosemite's Indian Village that mentions Kau'tcitti, an Indian scout for the white militia and enemy of original Yosemite Indian people, but there is no mention of Chief Tenaya in the village."
In case you're wondering what happened to Tanaya, it is reported that he left the reservation after some time, promising to be civil with non-Natives. Tenaya returned to the Mono Lake Paiutes, and at one point he and his band stole horses from the Paiutes they were living with. They fled to Ahwahnee in 1853. The Paiutes found them and stoned Tenaya to death. The survivors were taken back to Mono Lake to live among the Paiutes.

Another blow to Ahwahnichi history is that Chief Bautista of the Miwok is commemorated at the Park, as well. He allied with James Savage and his people helped the white miners dig gold. The Miwok were more peaceful than the Paiutes and probably agreed to do this in order to avoid violence and relocation. Perhaps Bautista believed that siding with the whites would mean they'd eventually leave them alone, which never happened, unfortunately. Because the Miwok were enemies of the Ahwahnichi and because the Ahwahnichi were violent, they called Ahwahnee Yosemite, meaning "killers live there." Bautista used the phrase often, and whites believed it was the Valley's name. It stuck. It is unclear why these enemies to the original Ahwahnee Indians are commemorated, and is further unjust that the Park will not listen to the Paiute when they try to show them how this is incorrect.

It doesn't seem to me that there really ever were Miwoks native to the Valley. The Ahwahnichi, and later the Paiute from Mono Lake led by Tenaya were the ones who settled the Valley. Miwok may have lived there at some point, but they were not the Ahwahnichi. If you have information to the contrary, please let me know. Most of this information has come directly from Paiute people via Indian Country Today and Yosemite Campers, so some of it is undoubtedly valid. Historical accounts can often be mixed up, which is probably (and hopefully) the cause for these inaccuracies. However, it does appear that something beyond innocent mistakes has been and is occurring. A post on Yosemite Campers here (scroll to the post that was posted by Pomogo on Sunday, July 09, 2006 - 03:38 am) gives some possible reasons that Bates, the retired ethnologist, would support a false history of Miwok in Yosemite.

I just wanted to share this information with you, as I find it very disturbing. It makes me want to study the Miwok and Paiutes, get a degree to become an ethnologist and go work for Yosemite National Park to set the record straight. I love visiting Yosemite, but now I wonder how much the Park is biased toward the Miwok, for whatever reasons, or if it was just the action of Craig Bates that caused these issues. It isn't fair that the Paiute should be left out from the history of Yosemite, as they were most definitely a part of it. I read in one of the articles I've been researching that to commemorate the Miwok in Yosemite National Park is like honoring "the Indian scouts at the massacre at Wounded Knee, instead of those who died."

Ahwahnichi/Mono Lake Paiute word of the day: Ahwahnee, "like a gaping bear's mouth"
If you want to learn more, scroll through the articles on the sites I've linked above. It is truly eye-opening that this has happened. It is as though the Paiutes are being erased from Yosemite's history, which is scary. One would think those kinds of things were only something done in the past, when racism toward the Natives was common. It's important to remember that these things still happen today and in the most unlikely places.

I would love to hear your comments on the issue.