Christmas songs of today often find their roots in older folk traditions. German songs like "O Christmas Tree" (originally "O Tannenbaum"), "Silent Night" ("Stille Nacht"), and "Ode to Joy" ("An die Freude") have become synonymous with Christmastime, and most people don't realize that they were originally written in German.

The Winter Solstice has been celebrated for thousands of years. People during late Neolithic and Bronze Age eras may have been holding ceremonies to celebrate the Solstice. Folk traditions and religious ceremonies throughout the world coincide with this time of new life, the mark of mid-winter.

Mummer's Day is an ancient Cornish midwinter celebration that occurs every year on December 26 and New Year's Day in Padstow, Cornwall. It was originally part of the pagan heritage of midwinter celebrations that were regularly celebrated all over Cornwall where people would dance and disguise themselves by blackening up their faces or wearing masks. In Penzance the festival has been given the name Montol believing it to be the Celtic Cornish word for Winter Solstice. 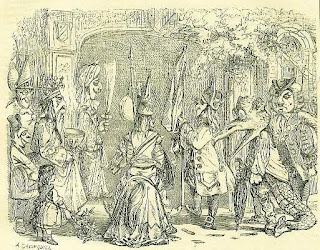 "A Party of Mummers" Chambers' Book of Days

For an unknown period, Lá an Dreoilín or Wren day has been celebrated in Ireland, the Isle of Man and Wales on December 26. Crowds of people, called wrenboys, take to the roads in various parts of Ireland, dressed in motley clothing, wearing masks or straw suits and accompanied by musicians supposedly in remembrance of the festival that was celebrated by the Druids. Previously the practice involved the killing of a wren, and singing songs while carrying the bird from house to house, stopping in for food and merriment.

Influenced by the Ancient Greek Lenaia festival, Brumalia was an ancient Roman solstice festival honoring Bacchus, generally held for a month and ending December 25. The festival included drinking and merriment. The name is derived from the Latin word bruma, meaning "shortest day" or "winter solstice". The festivities almost always occurred on the night of December 24. 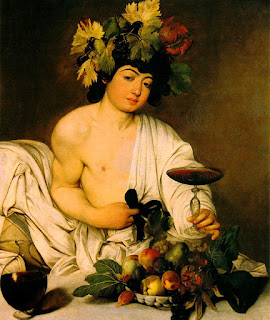 Originally celebrated by the ancient Greeks as Kronia, the festival of Cronus, Saturnalia was the feast at which the Romans commemorated the dedication of the temple of Saturn, which originally took place on 17 December, but expanded to a whole week, up to 23 December. A large and important public festival in Rome, it involved the conventional sacrifices, a couch set in front of the temple of Saturn and the untying of the ropes that bound the statue of Saturn during the rest of the year. Besides the public rites there were a series of holidays and customs celebrated privately. The celebrations included a school holiday, the making and giving of small presents (saturnalia et sigillaricia) and a special market (sigillaria). Gambling was allowed for all, even slaves during this period. The toga was not worn, but rather the synthesis, i.e., colorful, informal "dinner clothes" and the pileus (freedman's hat) was worn by everyone. Slaves were exempt from punishment, and treated their masters with disrespect. The slaves celebrated a banquet before, with, or served by the masters. Saturnalia became one of the most popular Roman festivals which led to more tomfoolery, marked chiefly by having masters and slaves ostensibly switch places, temporarily reversing the social order. In Greek and Cypriot folklore it was believed that children born during the festival were in danger of turning into Kallikantzaroi which come out of the Earth after the solstice to cause trouble for mortals. Some would leave colanders on their doorsteps to distract them until the sun returned. 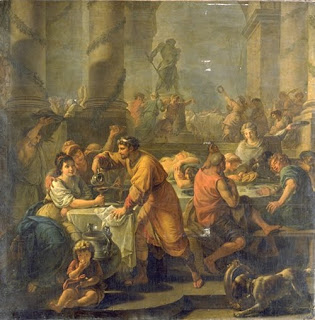 In late seventh century Japan, festivities were held to celebrate the reemergence of Amaterasu or Amateras, the sun goddess of Japanese mythology, from her seclusion in a cave. Tricked by the other gods with a loud celebration, she peeks out to look and finds the image of herself in a mirror and is convinced by the other gods to return, bringing sunlight back to the universe. Requiems for the dead were held and Manzai and Shishimai were performed throughout the night, awaiting the sunrise. Aspects of this tradition have continued to this day on New Years. 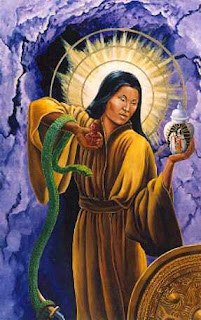 In the Aegean civilizations, the exclusively female midwinter ritual, Lenaea or Lenaia, was the Festival of the Wild Women. In the forest, a man or bull representing the god Dionysus was torn to pieces and eaten by Maenads. Later in the ritual a baby, representing Dionysus reborn, was presented. Lenaion, the first month of the Delian calendar, derived its name from the festival's name. By classical times, the human sacrifice had been replaced by that of a goat, and the women's role had changed to that of funeral mourners and observers of the birth. Wine miracles were performed by the priests, in which priests would seal water or juice in a room overnight and the next day they would have turned into wine. The miracle was said to have been performed by Dionysus and the Lenaians. By the 5th century BCE the ritual had become a Gamelion festival for theatrical competitions, often held in Athens in the Lenaion theater. The festival influenced the ancient Roman Brumalia.

Originally the name Giuli signified a 60 day tide beginning at the lunar midwinter of the late Scandinavian Norse and Germanic tribes. The arrival of Juletid thus came to refer to the midwinter celebrations. By the late Viking Age, the Yule celebrations came to specify a great solstitial Midwinter festival that amalgamated the traditions of various midwinter celebrations across Europe, like Mitwinternacht, Modrasnach, Midvinterblot, and the Teutonic solstice celebration, Feast of the Dead. A documented example of this is in 960, when King Håkon of Norway signed into law that Jul was to be celebrated on the night leading into December 25, to align it with the Christian celebrations. For some Norse sects, Yule logs were lit to honor Thor, the god of thunder. Feasting would continue until the log burned out, three or as many as twelve days. The indigenous lore of the Icelandic Jól continued beyond the Middle Ages, but was condemned when the Reformation arrived. The celebration continues today throughout Northern Europe and elsewhere in name and traditions, for Christians as representative of the nativity of Jesus on the night of December 24, and for others as a cultural winter celebration on the 24th or for some, the date of the solstice. 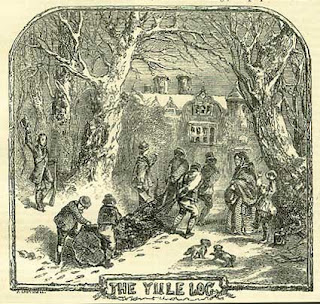 In Germanic Neopagan sects, Yule is celebrated with gatherings that often involve a meal and gift giving. Further attempts at reconstruction of surviving accounts of historical celebrations are often made, a hallmark being variations of the traditional. However it has been pointed out that this is not really reconstruction as these traditions never died out – they have merely removed the Christian elements from the celebration and replaced the event at the solstice.

The Icelandic Ásatrú and the Asatru Folk Assembly in the US recognize Jól or Yule as lasting for 12 days, beginning on the date of the winter solstice.

In Wicca, a form of the holiday is observed as one of the eight solar holidays, or Sabbat. In most Wiccan sects, this holiday is celebrated as the rebirth of the Great God, who is viewed as the newborn solstice sun. Although the name Yule has been appropriated from Germanic and Norsk paganism, elements of the celebration itself are of modern origin.

What holiday do you celebrate?
Do you have any interesting stories about its roots or history? Family traditions? I'd love to hear from you.