July 24, 2017
This afternoon in the Farm Garden, I led a Garden Talk on my new favorite flower: Lavender! Everyone currently working in the Farm Garden took turns last week and today presenting for 10-12 minutes each on garden topics of our choice. Other apprentices shared about topics like quail, African and African-American traditional foods and crops, compost worms, the impact of colonialism and forced removal on Native American traditional foodways, the "Language of Flowers" and their meanings, mycorrhizal fungi, and more! I chose lavender because I've been collecting and drying bunches of lavender in my tent cabin for a few weeks, and as I learned more about its uses, I was blown away by its incredible range of uses, both medicinally, culinary, and beyond.

I've adapted my presentation into a blog post to share with you all below. In addition to presenting on lavender, I also brought some different lavender varieties, books with recipes and information, lavender essential oil, a lavender tincture some of us apprentices made, lavender lemonade that I made this weekend, and a big batch of lavender shortbread cookies! The lemonade and cookies turned out really great, so I've included the recipes I used at the end. 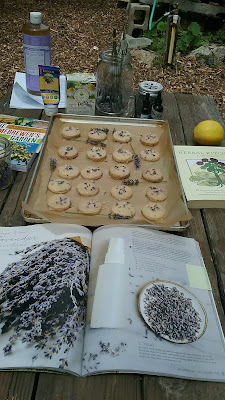 I set up the picnic table in the Farm Garden for my presentation. Pictured here are only 20 of the 70 shortbread lavender cookies I baked last night.

I started off my garden talk with an excerpt from the 1584 poem “A Nosegay, Always Sweet: For Lovers to Send for Tokens of Love at New Year’s Tide” by William Hunnis. It references numerous flowers and their associations in Elizabethan London culture at the time:

Lavender is for lovers true,
Which evermore be fain,
Desiring always for to have
Some pleasure for their pain;
And when that they obtained have
The love that they require,
Then have they all their perfect joy,
And quenched is the fire.

The complete poem can be found here.

Origins and Stories
Lavender is in the Lamiaceae, or mint, family, and it is native to the Mediterranean region, the Arabian Peninsula, Russia, southwest Asia, and India. It has been used in human cultures for more than 2500 years. Some of its earliest uses included mummification and perfume by the Egyptians, Phoenicians, and Arabic peoples. Tutankhamun was buried with perfume jars believed to have contained lavender.

It is referenced in the Bible as “spikenard,” and one tradition says that the first lavender bush grew in the Garden of Eden and was carried by Adam and Eve with them when they left.

It was used by the Romans as an oil for bathing, cooking, and scenting the air and public baths, and by the Greeks as medicine.

Because extracting the oil is difficult, it was historically reserved for royalty. I came across numerous stories of kings and queens who greatly enjoyed lavender. One of the most interesting stories is that Queen Elizabeth I hired a full-time "herb strewer" to scatter flowers and keep lavender well-stocked for tea. The queen was said to drink up to 10 cups of lavender tea daily to treat migraines.

During the Great Plague in London in the 1660s, people wore lavender on their wrists to protect from disease because it seemed that glove makers who added lavender to their leather rarely contracted the deadly disease. Lavender is also one of the ingredients in “4 Thieves Vinegar,” which is supposedly the vinegar mixture drunk by thieves during the plague to ward off the disease while they stole from graves and homes of the dying. It actually does contain antibacterial and antiseptic properties, so there was something to this!

Moderns studies have suggested that men in general are most attracted to the scents of lavender and pumpkin, and in Elizabethan England, lavender had a similar reputation. In Shakespeare’s The Winter’s Tale, Act 4, Scene 4, lavender's known association as an aphrodisiac for men is referenced in lines by the character Perdita when she says to Polixines and Camillo:

Here’s flowers for you;
Hot lavender, mints, savoury, majoram;
The marigold that goes to bed wi’ the sun,
And with him rises weeping: these are flowers
Of middle summer, and I think they are given
To men of middle age. You’re very welcome.


Lavender is grown commercially today for use in perfumes, lotions, and other products. It has been a foundational oil in the perfume industry for centuries.

The name lavender and its scientific name Lavandula come from the Latin word “laver,” which means “to wash.” There is also a similar Latin word that means "livid, or bluish," which could be a possible origin, as well. The cultivated plant can range from deep purple to “lavender” to pale pink and white.


Uses & Properties
The leaves and flowers can be used for a number of purposes, both medicinal and culinary. Medicinal properties include providing pain relief, anti-bacterial, antifungal, anti-inflammatory, anticatarrhal (or reducing excess mucus), antispasmodic, aids in digestion and gas relief, calms and strengthens the nervous system, deodorant, helps with breathing, circulation, gynecological issues, and soothes and heals inflamed tissues. Lavender can be applied topically to treat skin conditions, as well as made into teas and tinctures. Lavender baths can help ease tension and stress, as well as relieve muscle pain, irritability, and restlessness. Lavender sprigs can be rubbed on teeth and gums as a natural toothbrush and cleanser.

Its culinary uses are similarly expansive. It can be infused into olive oil, coconut oil, vinegar, fruit juices, honey, milks, and alcohols. It can be added to pesto, soup, stir-fries, sauces, marinades, cocktails, smoothies, sorbet, ice cream, and ground into salt or sugar mixtures. It is one of the ingredients in Herbs de Provence. The stems can also be used to skewer meat or veggies on a grill. It can also be baked into cookies, scones, cakes, and other baked treats. 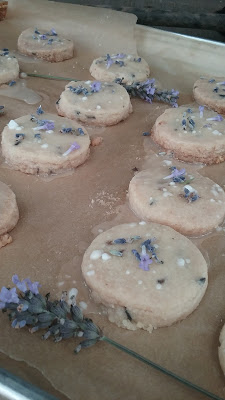 The lavender shortbread cookies were a huge hit! I'd definitely make them again. See the recipes for cookies and lemonade at the bottom of this post. 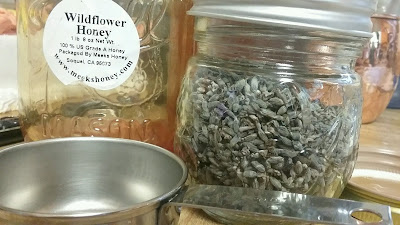 For the lavender lemonade, you infuse honey with lavender flowers before mixing with lemon juice and water.

Lavender can also be brewed into beer for aroma by adding dried flowers in the last few minutes of the boil and/or by adding it to the fermenting vessel 3-7 days before bottling or kegging the beer, which is similar to “dry hopping.” My fiance Green Guy and I experimented with this recently by adding dried lavender flowers at the end of the boil for a Belgian Blonde Ale. We are bottling it next week and look forward to trying it! People have been adding lavender to beer since at least the 1600s.

As an herb or when distilled into essential oil, lavender can be added to baths, soaps, lotions, foot soaks, and massage oils. It can also be infused into vinegar as a cleaner due to its antiseptic properties and refreshing scent, and it can be used as an insect repellant. It’s also commonly used as a sachet to place in dresser drawers and as a potpourri.

Books and online resources (see "Sources" below) provide countless recipes for all of these uses. It’s important to pay attention to details in these recipes, such as whether it's calling for dry or fresh lavender. Fresh lavender has a shorter shelf life and affects how you process products like infused oils and cordials, for instance. Dried lavender is also more potent, so you would use less of it than fresh lavender. 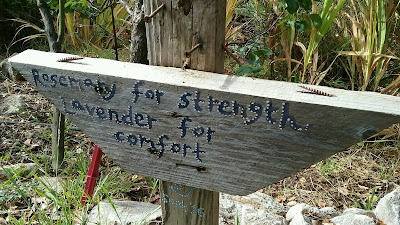 In the Up Garden, we have a Lavender Lounge with multiple varieties of lavender, a small area to sit, and this sign.

How to grow and harvest
Lavender is a wonderful plant to grow, not only for the many reasons listed above, but also because bees love it! It is grown best in Mediterranean climates in full sun with well-drained soil. It is drought tolerant and best propagated by cuttings or division. It blooms in the summer, and by harvesting flowers throughout the summer, it can extend their blooming season. Plants can also be pruned lightly to promote branching in spring. For cut flowers, it should be harvested when half or less of the blooms are open. For essential oils, it should be harvested right before blooming at the peak of the day’s heat. Culinary and medicinal uses may call for buds, blooming flowers, or stems.

Now do you see why lavender is my new favorite flower? I'm excited to try more recipes with the lavender from the Farm, including a relaxing foot soak after a hard day's work!

"Lavender: 12 Uses Beyond Potpourri." Living on a Green Thumb. livingonagreenthumb.wordpress.com.

Easy Lavender Shortbread Cookies
Adapted from a recipe by Kevin Lee Jacobs, A Garden for the House

Ingredients for about 4 dozen, 2-inch diameter cookies
Optional Adornment
1. In the bowl of a standing mixer outfitted a paddle, beat the lavender, sugar, and butter at low speed until smooth.
2. Then add the flour and beat until combined. Mixing is complete when there are no visible lumps of butter/oil in the dough.
3. Form the dough into a rough ball, return to the bowl, cover, and chill in the refrigerator for 30 minutes.
4. Roll the dough into a 1/4-inch thick circle; cut out cookie shapes with a round, 2-inch diameter cutter.
5. Using a flat spatula, transfer the rounds to a parchment-lined baking sheet. Chill for 30 minutes before baking.
6. Bake on the middle rack of a preheated 300 degree oven just until the sides of the cookies begin to color — 25-30 minutes. Let cool completely on the baking sheet.
7. Decorate with the optional glaze; sprinkle with lavender petals or buds. Serve on a platter with lavender sprigs if possible.

Lavender Lemonade
Original recipe here. Special thanks to my sister Jeune Gal for drawing the design of this recipe handout that I made for my presentation! 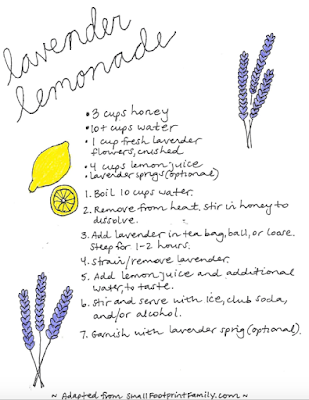