February 26, 2017
In fall 2016, I began designing the backyard at Green Guy's mom's house so that it can become a cornucopia of year-round vegetables, flowers, and berries in a garden featuring symmetrical raised beds. The past two weekends, Green Guy, his mom, and I have been hard at work turning the design into reality. It's been a fun, hands-on opportunity for me to put into practice what I'm learning in my Permaculture Design Course (PDC), and it's also helping me better understand what to think about as I continue designing a permaculture garden at a local winery for my PDC group project (more on this soon in a future blog post). 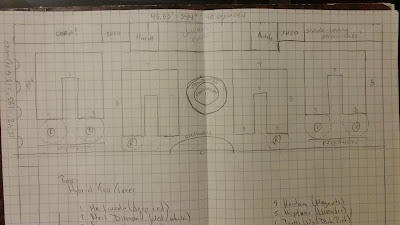 The original (ambitious) design of the backyard from fall 2016. There are now only two beds that are 11' x 8' with a 2' walkway in the U part. The raspberries and blackberries (4 of each) are spaced around the perimeter of the yard, and the blueberries (4) are in containers at the corners of the raised beds that face toward the center of the yard. The roses haven't gone in yet and the fountain and strawberries area in the center isn't finalized, but we'll tackle that phase soon.


We spent time brainstorming and asking questions about our goals for the backyard garden at the beginning of the design process, something that naturally happens when you begin designing--especially for someone else--and something that I learned about at the beginning of the PDC. A bare bones vision statement that came out of this process was, "There is a garden with vegetables, perennial flowers, and chickens in the backyard." I had learned in the PDC to write in first person for all goals statements so that the idea is more active and allow for the designer and client to get a sense of what it feels like to state them in the present tense. Some of the goals included, "The garden produces vegetables year-round"; "The garden has automated irrigation, as well as water catchment"; "The garden is beautiful to people, attracts wildlife, and adds value to the property"; and "Chickens in the garden produce all the fresh eggs for the household."

There are other values and goals that have been identified since we first drafted these, such as symmetry and a preference for organic seeds and seedlings when possible. We also spent time at the beginning identifying constraints, environmental factors, and where the sun falls during the day. Some of these goals, such as rainwater catchment and chickens are later phases that we aren't focused on just yet.

The garden bed design came together over the course of a few weeks in fall, although it's taken us many months to implement thanks to the holidays and our busy lives. The design prominently features two identical raised U-shaped beds, with a fountain in between them. Other elements, such as the compost pile and the perimeter spacing of the berry plants have been added in the last few weeks of identifying plants and considering the reality of space needs. We made huge progress in recent weeks, and as of today, both raised beds are now built and ready for plants--although we hope to add a higher wall with key access areas on hinges so that we can keep cats and eventually chickens out of the beds. The chickens will be added to the garden next year once Green Guy's mom returns from a trip to Antarctica in late fall.

At the beginning of the design and again recently, I asked Green Guy's mom to share her favorite vegetables and flowers, and I also had her look through a seed catalog. As we acquired a list, I began collecting information about each plant on small notecards so that we could move them around and identify which ones would go best together. Once we identified which vegetables we thought would go in each bed, I created a spreadsheet adapted from one of Dave Jacke's Edible Forest Gardens books that covers all of the information that I would need about the plant to identify where to plant it in relation to other plants: sunlight needs, water needs, ph and soil type, human uses, plant functions, plant spacing, companion plants, where to buy seeds/starts, how to take care of it, how many plants to grow per person, and where to find more information. A second tab on the spreadsheet indicates when to plant, harvest, and re-seed (based on suggestions from Santa Clara Master Gardeners). A third tab shows each bed throughout the year, with plants growing and then being replaced over time. 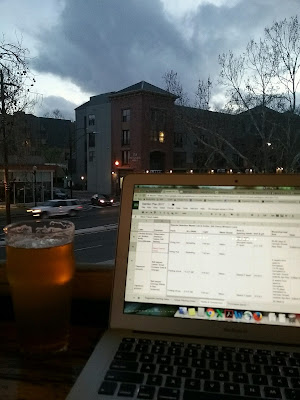 I worked on the plant design whenever I had free time this past week. One day after work, I waited for Green Guy to pick me up near the bus station by grabbing a beer at Mission Creek Brewery on The Alameda and utilizing their free wi-fi to update the spreadsheet (it's on a shared Google Sheet).


Over the past couple of weeks, I've spent more than 24 hours updating the spreadsheet and then putting the plants for bed #1 into a grid (below) of where they'll actually be planted. Finally today we got some seeds into the beds! I have a decent sense of what is going into bed #2, but the grid needs to be filled in. Once that is complete, I'll turn my attention to the central fountain design area and the perimeter of the garden, where we currently have raspberry and blackberry bushes. 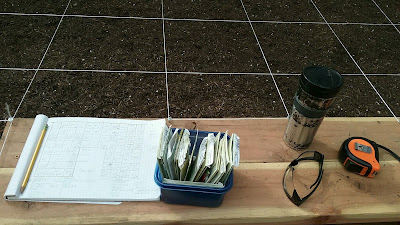 Some other future plans include building a solitary native bee hotel, adding a lot more perennial flowers, growing herbs in containers, and hanging baskets of drought tolerant flowers along the fences. The big project for next year is the chicken coop and preparing for chicks!

As we make more progress in the garden, I'll post more updates. For now, here are some photos of the beds from the past few weekends: 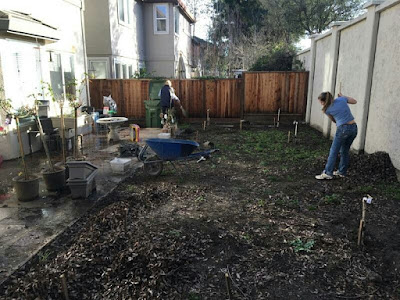 Before bed #1, from early February 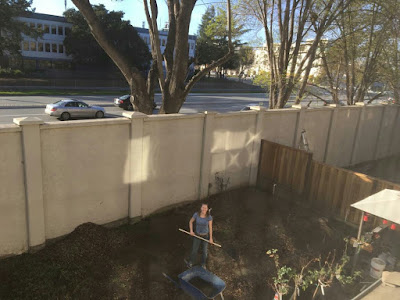 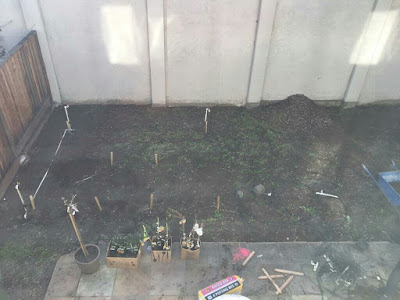 Some views from above the backyard in early February 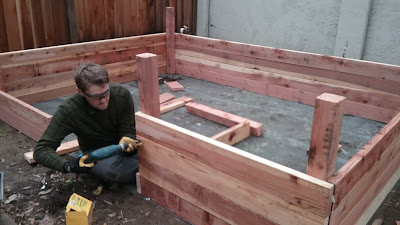 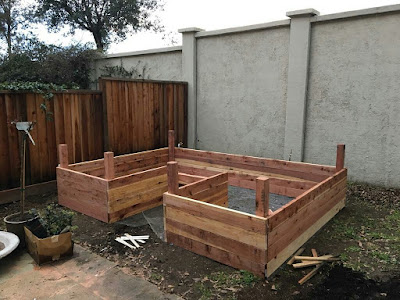 Bed #1 nearly complete on February 18! Green Guy did most of the building while I planted raspberries and blackberries. The dimensions are 11' x' 8' with a 4' deep U for access to the center. It's 2' tall, and eventually it will reach 3' tall with hinged fencing (like this). Green Guy added a small bench area at inner part of the U, and we poured in all of the soil (50 bags!) on February 19.

We're basing the design off of these hinged fence beds, which have drop-down hinged access areas and see-through fencing but keep chickens out! 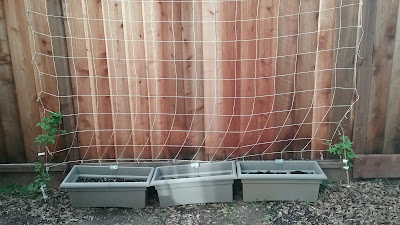 Peas and raspberries along the southern fence. 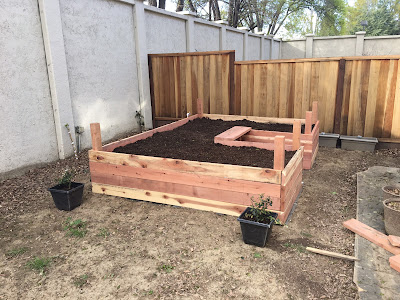 Today and yesterday, Green Guy put together bed #2. We added ~50 bags of soil to each bed, which did create a lot of plastic waste but definitely beat having muddy soil sitting on the driveway for two weeks as we slowly wheelbarrowed it to the beds (it was rainy last weekend). Both beds have gopher wire underneath them to keep gophers from stealing our veggies. Most of the plants going into this bed won't be planted until April or later: tomatoes, peppers, squash, melons, eggplant, edamame, cucumbers, and some flowers. The area along the back wall will be planted with hops, corn, beans, pumpkins, and some perennial flowers around April. I still need to solidify the planting design for that area, as well as grid out bed #2. 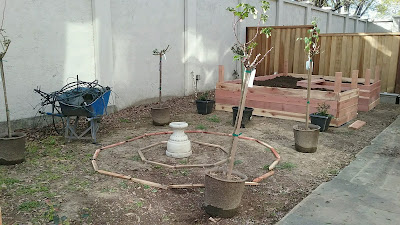 Green Guy's mom laid out her vision for the future of this center space before we left today. This central area is phase 2 of the design, along with the back wall plantings. I'll share more photos and updates soon!

Thanks for reading! Post in the comments or feel free to send me an if you have questions or suggestions!
Green Gal