May 23, 2016
This post is part of an ongoing series called "Mapping History." Get the backstory here.

My first entry in this series focused on one quote about the "most desirable" part of Santa Clara Valley according to the author of Santa Clara County California, published in 1887 by the Santa Clara County Board of Trade. In this second entry, I've pulled out some more of the quotes that demonstrate the significance of agriculture in this region as the basis for its rapid growth at the time the book was written.

Before I share the quotes, I want to explain that this book opens with a discussion of the geologic history of the region and then goes into its climate and soil as a foundation for why agriculture is so lucrative here. From the beginning, nearly the entire book focuses on the ideal climate of the valley and the fact that almost anything can be grown. Agricultural productivity is the main argument throughout the book for why easterners should move here and purchase land.

I've selected quotes that demonstrate this best, but really almost every sentence in the book paints the picture of agricultural paradise. When I read and studied The Grapes of Wrath in high school, I learned that this kind of propaganda was widespread in the 1930s to encourage people to come live in California, so although this was written in 1887, I take some of these claims with a grain of salt, especially given how many times the author claims that this area was the best in the world for a variety of different crops. Despite this caveat, the importance of the region's agricultural history in shaping its future is evident.

"Of the varied productions of this valley it is difficult to speak in terms which shall not savor of exaggeration. The question is no longer what can, but what cannot be successfully produced" (11-13).

"To-day, with this industry [the growing of fruits] comparatively new--its means of transportation a monopoly--its markets but recently found, and its methods of reaching these markets an experiment; with all these to contend against, the fruits of this valley are as well known, and highly esteemed in the markets of the East and of the world as are those of Sicily, Asia Minor and the Adriatic [...]" (13).

"Orange trees have been grown for many years in this county (in San Jose more for ornament than for fruit) generally seedlings, and with no care as to either selection or culture. In the vicinity of San Jose, considerable groves have been growing for twenty years, producing abundant crops of well-flavored fruit. The citrus fairs held last year in San Jose and other places showed the very extensive sections where these fruits were being successfully grown; and this, with the stimulus of a market, has induced the planting of orange trees throughout the warm belt in this county" (15). 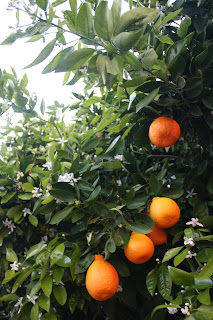 We have an orange tree at our current house, and the place we're moving to in June also has an orange tree. Fruit trees are ubiquitous in San Jose.

"In this description of the capabilities and climate of Santa Clara Valley, I have substantially described San Jose--for this is her environment, these are her resources, this the rich setting, of which the 'Garden City' is the central gem" (19).

"The basis of the past, present and future prosperity of Santa Clara County is its agricultural resources. These resources depend on the fertility of the soil and congeniality of the climate. The experience of years demonstrates that our soil contains all the elements essential to plant growth, while our climate is of a character that insures the perfect maturity and ripening of its products" (49).

"While Europe, Asia and some of the United States can grow one or two of our fruits, there is no spot on the globe where they can all be grown to such perfection as in California, and no place in California where they can be grown to such advantage as in Santa Clara County. The character of the soil, the topography of the country, the peculiarities of our climate, and our situation as regards transportation and market combine to place this county at the head of the fruit growing countries of the world" (50). 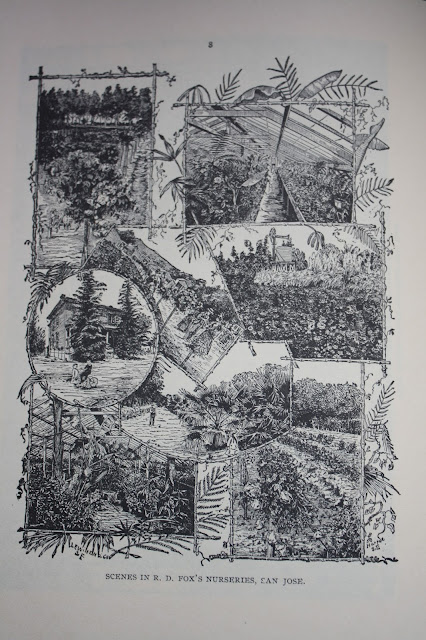 It's fascinating to me that the history of this place is so rooted in agriculture and that this very success was a factor in bringing so many people to the area. Today, this is no longer well-known as The Garden City but rather a central place in Silicon Valley, a very different kind of connotation. If you look at San Jose today, you see an urban center with huge buildings and crowded freeways surrounded by suburban sprawl. There are more people here than affordable housing can accommodate, traffic on our freeways and trains is ridiculous, and airplanes and train horns contribute to the urban orchestra of sounds. Reading about the beautiful landscape, birdsong, and open farmland of 1887 while sitting in today's San Jose is odd--but it's also inspiring. Because if you look a little closer at San Jose today, you'll notice that underneath and next to freeways, in neighborhood yards, at community parks, and in some of the most random places, there are farms and gardens growing, producing food and flowers, growing chickens and ducks (more on that here), and re-connecting to San Jose's agricultural heritage. 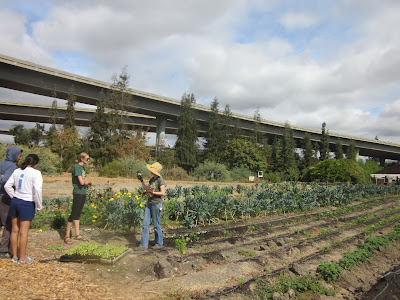 Veggielution Farm is located underneath the over crossings of highways 101 and 280 in San Jose.

Food connects and nourishes people. Growing food provides not only sustenance for oneself and neighbors who might not otherwise have access to fresh produce but also relief from the stress of spending eight hours+ in front of a computer screen and battling traffic on the way home. It's inspiring to me that people are still connecting with their food system and that there are people in this city working to expand urban agriculture so that more people can have access to healthy food, as well as a chance to connect with where it comes from.

The people I refer to are part of organizations like Garden to Table, Veggielution, La Mesa Verde, SPUR San Jose, the Health Trust, and others who are working to implement Urban Agriculture Incentive Zones (AB 551), which the UC Division of Agriculture & Natural Resources describes on their website: "In 2014, California implemented Assembly Bill 551, which allows landowners in metropolitan areas to receive tax incentives for putting land in agriculture use. First, cities and counties must create urban agriculture incentive zones." These organizations I listed are working to do just that in San Jose.

I attended an event at Garden To Table's Taylor Street Farm last month that engaged community members with questions about what we would want to see happen in these urban agriculture incentive zones. Questions ranged from, Would you eat food grown in a formerly vacant lot? to What kinds of animals should be allowed to be raised in these zones? to many others. The organizations who hosted the event are compiling our feedback in order to support the implementation of this bill in San Jose. You can learn more about this project on Garden to Table's website here and read about how San Francisco has adopted this ordinance here. 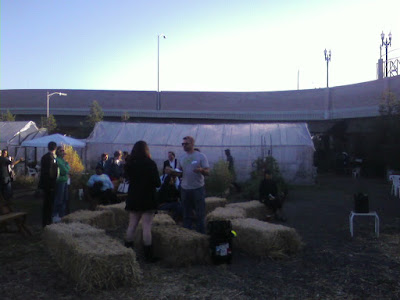 The Envision Urban Ag event I attended at Garden to Table's Taylor Street Farm in San Jose. Notice the freeway entrance overpass in the background.