Joel Salatin on Soil, Earth Worms, & Why We Need Farmers

April 20, 2016
This evening I attended a talk by Joel Salatin at the Santa Cruz Rio Theatre. I had heard of Joel Salatin through the Mother Earth News magazine, which I’ve been reading thanks to Green Guy’s step-mom and dad who have been passing their read copies along to us. Salatin works for PolyFace Farm in Virginia, where he not only grows food and raises animals (among many other things), but in his words, approaches his farmland, plants, and animals as one would a lover—caressing, caring for, and loving them so that they will be happy and thrive. He made a point to explain that he’s a romantic, a poet, and that even to use the word sunlight is too scientific for his liking. He prefers sunbeams, and I have to agree. 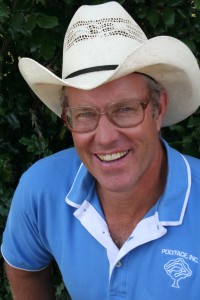 Thus, in addition to being a stellar farmer, he’s funny and poetic, and he had the audience laughing and smiling throughout the evening. But within and between his jokes, which featured many imitations, funny faces, and metaphors, Salatin told a story of our nation’s and our planet’s history featuring the choreographed dance of megafauna and birds from season to season that nourished—"caressed"—the ecosystems of our planet and most importantly, the soil.

The story told of the grazing of megafauna—animals larger than humans, he defined—who roamed to new places with the changing seasons—and the migration of birds, who filled the skies so that the sun wasn’t visible for days. These animals traveled for miles and miles, in huge packs, and they grazed on grass—which converts sunlight into energy more efficiently than trees and therefore helps with carbon sequestration in amazing ways—and pooped and then moved on, which gave the land a chance to rest. For millennia these animals danced in sync so that the land was nourished and the circle of life could thrive.

No longer, however, is it possible for the remaining wild animals of our world to do this in most places, thanks to our buildings and cities and freeways—and ice cream parlors, he reminded us. Not to mention we don't have animal populations on that scale anymore. We know this, and yet we don’t think about what it means for our soil, our earthworms, and the many living beings (microbes) who live in the incredible soil ecosystem beneath our feet. One thing Salatin encouraged us to do is ask ourselves in the shower in the mornings, “What am I going to do today to help the earth worms?” Laughter of course followed, but this really is a question that we should be asking, in addition to the question, “How will my actions affect the earthworms of my region, of our planet?” The answer to the question is important for the future of food.

In his creative and funny way, Salatin made the story of our topsoil depletion weave directly into a solution that he practices on his own farm: grazing animals and chickens on a rotating basis in a managed, structured way. The cows eat the grass when it’s at the end of its productive growth (he went into detail about the lifespan of grass), they poop digested grass onto the soil in a way that nourishes the soil extremely faster than if the grass had decomposed where it died (I had never before realized that composting is biomimicry of ruminating animal stomachs), and then they move on. Then come the chickens, who help also with the pooping and the squishing of the poop into the soils, and also eat the insects. And then they move on, the grass can grow again, the soil microbes dance and sing, and when the grass is ready to be grazed again, the animals come back. With the human intervention of helping migrate the pasture raised animals on the land, the farmer not only grows livestock but nourishes the soil ecosystems and earth worms that make growing food possible and sustainable.

Salatin also spoke about the issue with environmental abandonment, the belief that because humans have caused so much damage to our ecosystems over time, that the only solution is to not let humans access or participate in wild or open spaces. Salatin suggested that instead of just leaving land like this alone—or all land like this alone—that we conserve not only the land but also the farmer. The farmer is the one who can participate as a manager of land so that soil can be replenished with the help of other animals. The farmer of our era in many people’s minds is the farmer of industrial agriculture, depleting soil and polluting with chemicals—but this is not the only kind of farmer there is. It’s not the farmer I think of, thanks to the abundance of organic farms in the region where I live. The small scale, local, organic, agro-ecologically knowledgeable farmer is the farmer of our future—if we support farmers like this in our purchases and lifestyle choices.

A huge takeaway message from this talk was that we need more farmers, young farmers. Salatin said that the average age of farmers in this country is 60 years old, and that an industry is typically considered in decline when the average age of its “practitioner” is over 35 years old. Yikes! This message, though, resonated with me and felt affirming of what I’ve been thinking about lately. You all, my lovely readers and friends, have read and seen photos of my garden for the past seven or so months. You’ve seen photos of culinary experiments I’ve made from scratch. You’ve seen the beer fermenting carboys and sourdough starters and kombucha SCOBYs in my kitchen. The trend in the last seven or so months of my life has pointed toward food, the growing and eating and experimenting and fermenting of food. It’s been exciting and fun, and the more I do it, the more I realize how so much of my life’s work in sustainability education and community building and leading a life aligned with my values converges in the world of food--where it comes from, how it's put together artistically and culinarily, the community around the table, social justice and equity in healthy food access, and what our food does to nourish health of self and environment. Sustainable agriculture, gardening, "homecentric" local food, farming. Woah! So I’m thinking about what that means for my future, and where it might take me if I pursue it. My cousin recently began the farm apprenticeship program at UCSC, so I have a wonderful opportunity to live vicariously through him and find out what kinds of things he's learning and enjoying and finding challenging about the field (ha, get it?) of agriculture. 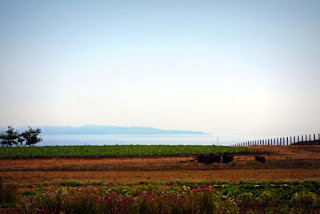 The Center for Agroecology and Sustainable Food Systems farm where my cousin is an apprentice at UCSC. It overlooks Monterey Bay, and it's one of my favorite places in the world. It's where I met Green Guy, actually! (Image source)


But since we can’t all become farmers tomorrow, Salatin encouraged us to keep in mind the many ways we can support sustainable, land-caressing, sustainable farmers. The major way is that we have the power to choose what we purchase at the market. He said we need people who are excited about buying seasonally, locally, cooking that local seasonal food in their own home, participating in community supported agriculture programs, and finding other ways to use our own unique skill sets and passions to support the needs of farmers. He spoke in-depth about why organic, small scale farms have more expensive produce and products—long story short, the permitting and approval system is rigged in favor of enormous corporations and monocultures that focus on only one crop or product. A small farm that wants to do a variety of things, which is what we really need for sustainable and resilient communities, has to pay unreasonably enormous costs due to policies that have been enacted in the era of industrial agriculture. Local, small scale farmers don't have higher prices because they want only rich people to access their food or because they want to make more money.

First, they are producing food that is humanely raised and sustainably grown and therefore representing actual costs that are hidden when you've got massive feedlots with antibiotics or pesticide-laden crops--yuck. But the higher costs are also due to an even more complex and frustrating story that provides a glimpse into the dangerous and scary direction our industrial agricultural complex has taken us. But, there's hope, and not only that, but good people are making change happen every day. And to be part of that starting now, when those of us who can currently afford to support small farms do and do so consistently over time, we can collectively support changes in the larger system.

All of these little snippets that I share are part of a larger story, one that you can research or probably read about in one of Salatin’s books, so if my statements seem confusing or unsubstantiated, believe me that Salatin made a solid case that left me astounded in my seat. And then a minute later, I was laughing along with a full house at the Rio Theatre, among farmers and community members who want to join Salatin in creating a sustainable future through happy soil and the many ways that happy soil creates better lives.

In looking Salatin up to write this post, I found out that he has a BA in English and is a writer--kinda like yours truly! An English degree-holding farmer? That’s awesome! It gives me hope and encouragement that there might be a place for me in the future of sustainable agriculture. We'll see where this inspiration and interest leads me on the path ahead...

In related news, this weekend is the UC Santa Cruz Bioneers Conference, which I've been a lead coordinator for over the past couple months. It's going to be incredibly inspiring and fun, and if you live in the area, I highly encourage you to attend this free event. My sister Jeune Gal is speaking and leading a workshop about social justice, feminism, body positivity, and intersectionality! Learn more at commonground.ning.com/ucscbioneers.

Until next time,
Green Gal

P.S. Thanks to my friend Maryna, also a UCSC sustainability alumna, for joining me at Joel Salatin's talk tonight! It's always better attending events with friends, and it was wonderful to have a chance to see you!