Why I Love Public Transportation

September 14, 2012
Sure, sometimes you end up next to the smelly guy on the train or you wind up getting the bus with the loud cell phone people or the crazies. But the more you take public transportation, the more skilled you become at selecting seats, using body language (like angry faces and glaring to avoid conversations!), and just learning to deal with it because there are plenty of reasons--I'm about to name five--why public transportation is awesome. Here's why I love public transportation, and why I encourage you to utilize it as often as you can in your daily life.

1. Public transportation reduces the number of polluting, traffic-causing cars on the road.
Every time you take public transportation when you might otherwise have taken a car takes one car off the road. Think about people who take PT every day to work, school, or wherever they going when they could have driven. Certainly a bus requires more fuel than a compact car, but if you fill a bus with people and take the cars the passengers would have been driving off the road, you're saving a ton of gas and reducing pollution and traffic congestion. 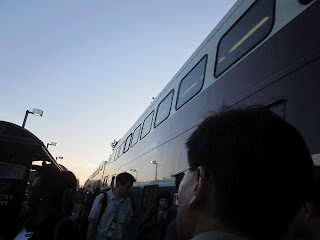 2. Staring out the window when you're a passenger and letting your mind wander is really good for your brain, particularly when the scenery is nice.
When I take the bus and train home from college, I almost instantly find myself glancing up to the window and letting my thoughts wander for awhile before returning to my book or computer. Most of my commute is through forest and then through open space, so my mind has nothing in particular to grab ahold of and capture my attention--I'm free to explore whatever aspect of the universe of thought that my brain has the capacity to access. Often, I recognize how much I need that unfocused thinking to the passing world in order to let my mind wander, and I put my book or computer away. Pretty soon, the notebook comes out and ideas for things I should do at work, school, or on my blog come pouring out. I outlined the plan for this blog post while sitting on the Highway 17 Express yesterday, for example. I write best when I'm inspired after some unfocused gazing off into space, like on the bus, and I often do my best thinking when I'm the passenger of a moving vehicle without distraction. It's this unfocused attention that allows our brains to recharge, and the same kind of thing happens for me when I'm surrounded by nature and am able to simply think. Turns out, it's not just me. Richard Louv discusses this and something called "directed-attention fatigue" (28) in his book The Nature Principle:

Over time, the Kaplans [who conducted a study with a group similar to Outward Bound in the 1970s] developed their theory of directed-attention fatigue. As described in a paper by Stephen Kaplan and Raymond DeYoung: "Under continual demand our ability to direct our inhibitory processes tires. . . . This condition reduces mental effectiveness and makes consideration of abstract long-term goals difficult. A number of symptoms are commonly attributed to this fatigue: irritability and impulsivity that results in regrettable choices, impatience that has us making ill-formed decisions, and distractibility that allows the immediate environment to have a magnified effect on our behavioral choices." The Kaplans hypothesize that the best antidote to such fatigue, which is brought on by too much directed attention, is involuntary attention, what they call "fascination," which occurs when we are in an environment that fulfills certain criteria: the setting must transport the person away from their day-to-day routine, provide a sense of fascination, a feeling of extent (enough available space to allow exploration), and some compatibility with a person's expectations for the environment being explored. Furthermore, they have found that the natural world is a particularly effective place for the human brain to overcome mental fatigue, to be restored. (Louv 28) 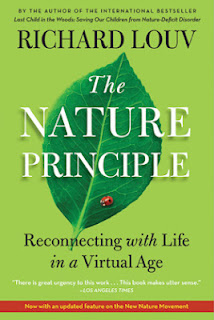 Along these same lines, it has always bothered me when parents have their kids watch DVDs in the back of the car on long drives. I was never that child, and I'm so incredibly thankful to my parents for forcing me to sit there and gaze out the window. Occasionally, I read a book or colored or sang songs with family, but after awhile, I would get bored of doing anything and start to watch the orchards go by (you know what I'm talking about if you've ever gazed out a car window in an agricultural setting--the rows are so fun to watch, it's addicting), or start day dreaming. Those poor kids who have their eyes glued to a television in the backseat aren't developing the habit of day dreaming and thinking without being focused on something. How are you supposed to think about your life as a whole if you're always sectioning it off into "projects" or "subjects" or "to-dos"? Sometimes you need to literally just sit and stare in order to put things together in your life, and while we all know this and have had experience with it, being aware of how important this is and acting on this every single day will make us all more clear-headed. Having these experiences as a child in a car or on a bus or train set the foundation for us to be able to be creative with our thinking and learn to entertain ourselves. Being able to simply be, think, and enjoy the ride without being entertained is so important, and this is why I will never let my children (if I ever have any) watch DVDs in the back of my car--oh wait, that's because I won't have a car! :-)

3. How often do you get to be the passenger? You can get work done as you travel when you aren't driving.
While I recommend gazing out the window for a good portion of your trip, you can also get work done when you aren't the one driving. Some buses and trains have free wifi, or you can read or use a computer without the internet. You can also nap, which I call getting a lot of good work done.

4. Public transportation costs significantly less money than owning and maintaining your own car, and you don't have to worry about parking or the stress of driving.
Even if you do own a car, using public transportation whenever you can reduces the amount of mileage you're accumulating on your car and means you don't have to pay for gas at the pump as often. You don't have to pay parking fees or even find parking in the first place. You can enjoy a drink without worrying about driving yourself anywhere (a college student's best designated driver is often the bus driver).

It can open your heart a little and make those uncomfortable moments on public transportation that I mentioned at the beginning of this article a little less of an issue. We're all just people doing the best we can, moving from one place to another. Maybe the smelly guy is homeless for reasons beyond his control; maybe the loud person on their cell phone is going through a rough time in their life and they need to have that conversation with whomever to make it through the day; and maybe the "crazy" people aren't really crazy after all. They just see life a little differently than you.

Hopefully this article makes you more inclined to take public transportation the next time you have an opportunity to do so. If not, I'm curious what your hesitation is, and I would love to hear from you in the comments.

Thank you for reading!
Have a great weekend!