March 11, 2011
Need another reason to recycle? Sometimes it's easier to just toss a recyclable into a nearby trashcan than to wait until you find a recycling bin, but here's a good reason to wait and dispose of it properly:

"Paper takes up 40-50 percent of the volume in American landfills. Despite the growing commitment to local recycling programs, the amount of paper is steadily rising--up from 35 percent in 1970. The rest of a landfill consists of in descending order of volume, construction/demolition debris, metals, plastics, other materials, food and yard waste, and glass." 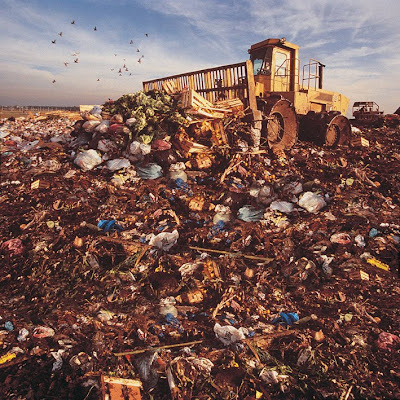 That quote is from my Archaeology textbook, Archaeology: Down to Earth by Robert L. Kelly and David Hurst Thomas (4th edition, published 2011 by Wadsworth CENGAGE Learning). A lot of the stuff listed there is recyclable and shouldn't even be in the landfill. We could save a whole lot of space for actual garbage by recycling things that are recyclable--especially paper!

On another note, in core class today, two local activists (a skate shop owner and a Santa Cruz mother with a culinary degree) spoke to the class about the volunteer activism groups they've started. In our class, we've read Gandhi, Malcolm X, MLK, Thoreau, and other thinkers who have enlightened us to various methods of enacting social change. The purpose of having real people come talk to us about how they are enacting social change was to make it clear that we aren't just reading these books so we can fill our minds with cool ideas; we're supposed to use this knowledge and these ideas to do something in the world. As Analicia Cube, founder of Take Back Santa Cruz, put it: "Take those ideas. Then go do something with it." She saw an issue in her community--gang activity, criminal activity, violence--and decided she'd had enough. She saw that the acts of violence and the criminal activity in Santa Cruz were degrading society, making Santa Cruz an unsafe place. People get angry every time something violent happened, but then the anger dissipates with time. Cube has a culinary degree, so it's no surprise that she likened the issue she sees to how a frog will jump out of an already-boiling pot of water, but if you put him in the pot and slowly cook him, he will sit there and cook. It wasn't enough to sit back and let the police deal with the gangs; she needed to do something.

She began her organization through Facebook, gaining membership by standing on a corner with a sign on Halloween and returning home to find 1,000 new members on her Facebook page. Her description of the methods enacted by her group reminded us all of Gandhi: non-violent protest. One of the things Take Back Santa Cruz has done is stand at the corner of Laurel and Pacific downtown where drug dealings take place. They get a big group together, peacefully resisting the illegal activity going on. Cube recounted an incident when a drug dealer approached her and asked her what was up. She said "Well, you certainly aren't dealing drugs this evening, that's what's up." Her passion for safety in her community is evident, and she certainly has attitude.

I really liked her message about positivity. She told us there's a reason they don't have signs and they aren't screaming in protest. That's a negative way to enact change, and she's all about positivity. In responding to a question about her relationship with local government and the city council, she said that though there are issues on which she disagrees with the members of city council, she chooses to live in the sliver of agreement that she's managed to find in each of them. She doesn't live in the place of disagreement, but finds a common ground in order to develop a relationship with each member. "The police, the fire department, the city council are all tools of society," she said. "Society has to employ them, though. They aren't going to go out and solve all the issues." Rather than resist the assets available to her as a leader for change, she chooses to utilize them and cooperate with them.

The other speaker, Danny Keith, agreed that it's important to be positive. Keith owns Santa Cruz Skate and Surf Shop and he began an organization called Grind Out Hunger. From the website:

Grind Out Hunger was created through the vision of skateboarders helping kids overcome hunger. Santa Cruz Skate and Surf Shop founded Grind Out Hunger with the one goal of inspiring kids to help kids; Danny Keith mentions “by going directly to the schools and talking with the kids, it has a huge impact.” Grind Out Hunger is an educational piece challenging local elementary, middle and high schools to raise food and money for hungry children in the community.... Keith continues “The collaboration between students and Grind Out Hunger has been very successful raising over 500,000 pounds together”.


Keith remarked that though skateboarders tend to be anarchists and that he doesn't believe he really needs the government/city council or any other organizations to help Grind Out Hunger be successful, he agrees that they are tools that can be helpful in the process of helping others. It was clear from his presentation that his biggest concern is feeding kids, since they are put in the circumstance of poverty. Their poverty isn't typically because of any decisions or mistakes they've made, but because they were born into it. Both Keith and Cube said that at points in their lives, they've looked at themselves in the mirror every morning to reinforce a positive, you-can-do-it mindset. "You have to believe in yourself before anyone else will," Keith remarked.

It was interesting to listen to individuals who are actively participating in causes they are passionate about. It was cool to see the ideas we've been reading manifested in real people. It isn't as though they necessarily read the texts we've been studying and decided to go out and live them; they have just found similar paths to enacting change. Getting an education means being exposed to these ideas, being able to put them into action, and recognizing their use in other contexts, which can help us determine which have been effective for others. Cube told us to constantly be curious and to discover what we're passionate about so we can do something with this education we're fortunate enough to be receiving. Needless to say, it was a very inspiring day in core class!

So, lessons learned today: Recycle everything recyclable, and don't let society be the frog that is unknowingly boiling in the pot. Wake up the frog/society and figure out how to turn off the stove/solve an issue you see taking place. 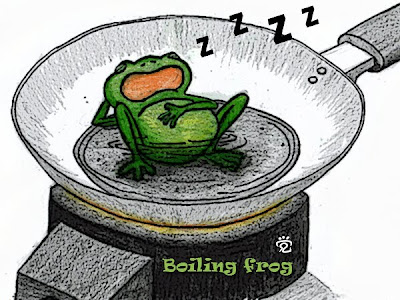 Have a fantastic weekend!
--Green Gal

P.S. I can see the white angry tsunami waves from campus...usually I can't see any white indicating a wave. I'm avoiding the beach for sure. At least Santa Cruz is a "city on a hill" so I won't be swallowed up by ocean. I feel so sad for the people of Japan. I can't imagine how terrifying that must be for everyone there and for everyone who has family or friends there. Japan and everyone affected in some way by the tsunami are in my prayers.

During a walk after class with my teacher, a student pointed out that while in Japan people's lives and livelihoods were destroyed by the earthquake and tsunami, in Santa Cruz, some boats sunk and the piers were mangled, and everyone's freaking out. The news this morning on TV, or at least the channel I was watching, was all about the boats. My teacher remarked, referencing the fact that we read Marx earlier this quarter, "Oh no! The bourgeoisie's yachts have been destroyed! How terrible!" Yes, the people who lost their boats in Santa Cruz and throughout California are in my prayers, too, particularly those whose boats are how they make a living. But I do wonder why the news this morning spent so much time talking about Santa Cruz, tsunami-wave-riding-surfers, and the tide here when that time could have been spent reminding us of the real tragedies across the Pacific and what is being done and can be done to help them.