In my many years of encounters with the performing arts, I had never experienced hip-hop theater before Sunday night when I attended a performance at The 418 Project on Mission Street in downtown Santa Cruz. The theatrical performance, entitled FreeLand, took place during the second half of a benefit evening for Black Mesa/Big Mountain Dine (Navajo) Native residents in northeastern Arizona. 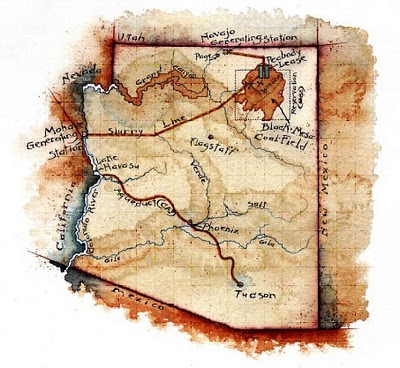 I'm hesitant to write about the Black Mesa situation, as I know very little about it. Essentially, the United States has been trying to relocate the Dine people for thirty or so years in order to access coal deposits under their homes. It's highly controversial, and these people have refused to leave their land. A group of people working with the Black Mesa Indigenous Support group is caravanning to the Black Mesa/Big Mountain reservation this month to provide support to the people who live there. I'm going to research the situation so I have a better understanding of what happened and what is currently happening, but if you know anything certain about the situation, please share it in the comments or by email and include the source of your information. 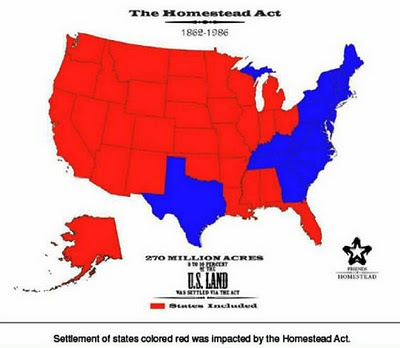 While I won't delve into the details of the Black Mesa situation, I would like to write about the FreeLand performance. Ariel Luckey, who grew up in Oakland, California, created this performance after researching the history of his grandfather's homestead in Wyoming. He discovered that the land had been wiped clean of Native Americans and then given for free to white settlers under the Homestead Act, passed by Lincoln in 1862. On a slide presentation after his performance, Ariel told us that each parcel of land contained 160 acres, and, in total, 270 million acres (10% of the entire United States) were distributed for free. One in five white Americans have at least one ancestor who homesteaded. The passing and implementation of this act largely influenced our nation's history by changing the histories of many individual families, tying them to a bloody history of genocide of the Native peoples who lived here. 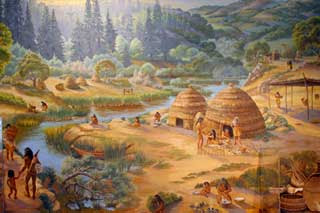 The Ohlone mural in the Santa Cruz Natural History museum exhibit. The culture of the Ohlone people fascinates me.

Ariel only performed three segments of his 90 minute show for us last night, and said before he began that he uses "art to start a conversation." I definitely identified with the first section that he performed, which focused on his search for cultural "color" as a white person with no distinct culture. Perhaps part of the reason that I'm drawn to learning about Native American culture is because I have very little culture myself. I'm descended from a variety of European ethnicities: French, German, Irish, British. The only ethnicity that my family celebrates culturally is Irish, but even that is quite subdued. We celebrate St. Patrick's Day and eat a lot of potatoes, but I know very little else about Irish culture, or about any of the other cultures related to my ancestry. I'm American, which has its own culture, but which is more globalized and less rich or unique. Ariel's performance suggested that it's as if the price of being American and blending into this nation's culture is to lose all cultural color and become culturally "white" or colorless. Of course, this is not true for all Americans; many who identify themselves as Americans maintain their cultural richness. However, for many Americans--mostly European Americans whose families arrived here a long time ago--distinct culture and roots to the past have been lost. In his poetric rap, Ariel mentioned a "hunger for spirituality and tradition," which made sense to me. "If you don't have roots, then how can you grow?" he asked at one point. His performance made me wonder about my cultural roots, and how I can regain a sense of the places and cultural settings my ancestors lived in.

He also shared the history of his family's land in Wyoming, and with movement, lyrics, vocal sounds, and music, told the story of a battle that took place near his grandfather's homestead before most of the Native peoples were eradicated. After the first section of performance, he asked everyone to talk to those around them about how they were feeling, since his performance is more than just a theatrical experience. It has a depth that can be emotional and difficult to hear.

Something interesting that he pointed out is how little our educated society really knows about Native Americans. We learn about them in various history classes, but the textbooks barely touch on that part of our past because it's so terrible. These people lived here for thousands of years, right where we live now, and sadly, they are given very little space in our society's generally-known history. Ariel observed that when we have specificity in our learning about something, especially history, it makes it more interesting. If teachers encouraged students to find out about their own past and to find connections to themselves that relate to the topics taught in history classes, students would be more engaged and more easily learn the material and remember it because of that personal connection. I know for myself, when I'm learning about something in a history class that relates to Native American culture or the gold rush--two topics I find fascinating and things I have some prior knowledge of--I learn the new information much easier than historical information related to topics I have no personal interest in, such as the many dynasties of China.

Ariel posed a question before he began his second performance: How has your family's stories been changed by this history of land theft and genocide of Native Americans? It definitely made me wonder. It also made me think about how UCSC is on stolen land, sacred land, that was once a place of great importance to the Ohlone people. Upper campus was a sacred bead making site. The former magical Elfland existed in the same places that years and years before, the Ohlone had felt a sacredness. Something about upper campus is special. For the Ohlone, the circles of redwood trees were considered sacred because the circle in their culture is important. It is interesting to me that students felt something magical in those same woods years later. Development in upper campus has been highly controversial, especially when Elfland was destroyed to build colleges 9 and 10. I've been to upper campus and explored the redwood circles of trees. I hope to spend more time there during my time living here. 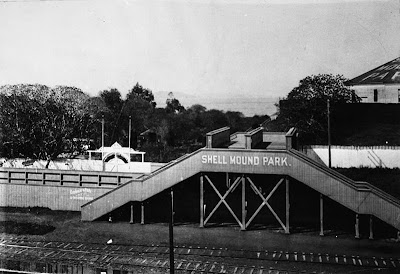 The second segment that he performed related to the Ohlone people, who lived in Santa Cruz as well as Pleasanton, where I'm from, and Oakland, where Ariel is from. He talked about the shellmounds (large piles of disposed shells from the Ohlone who subsisted on tons of shellfish over the years, in which the deceased were buried with cultural objects) and the various references one sees to Native culture in the street signs and park names in the places where the Ohlone used to live: Ohlone Way and Shellmound Way, for example. In this section, he repeated "digging down" and the motion of digging into the earth with a shovel to represent a shift back in time, digging deeper into this area's history. To build the Emoryville Bay Street Mall, construction crews tore open and removed the shellmounds located there, destroying burial sites and cultural artifacts of the Ohlone people. Burial sites are incredibly sacred to Native peoples. Disturbing or digging up gravesites is a terrible offense. The removal of the shellmounds to build a mall must have been gut-wrenching to the descendants of the people who were buried there. Ariel went back in time, touching on instances of disregard for Ohlone culture. At some point, Oakland and Berkeley streets were paved with bones from shellmounds. He mentioned Shellmound Park in Emeryville, where in a dance pavilion located right on top of the shellmound, people were "literally dancing on [the Ohlone peoples'] graves." Back in time, to 1769 when Junipero Serra and the missions arrived and enslaved the Ohlone, converting them to Christianity to "save" their souls. One last dig deeper in time, and Ariel portrayed life pre-contact, when the Ohlone survived alongside a "complex ecology of land and water," and enjoyed an abundance of food. He described it as "a civilization too subtle for European eyes," which I found to be a beautiful way to phrase the ignorance of the European colonial mindset. 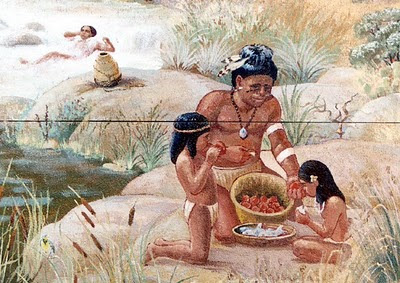 "This country is hella haunted," he said at the end. We have many ghosts in our past from various injustices. But we cannot go back in time, so Ariel discussed what our responsibilities are today. In saying that we cannot be silent and simply ignore the past, Ariel said we "can't be neutral on a moving train." Some things he identified as our responsibilities were sacred site protection, appropriate mascots, environmental conservation, energy extraction, and sovereignty and human rights. We have to be honest about the past and the truth, he said, but we are not responsible for our ancestors' actions. The final question he posed to us was, "What can we do to heal from the past, transform the present and create a better future?" He ended with a song about hope and freedom, and Free Land. 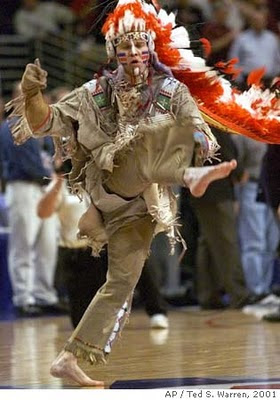 An example of an inappropriate mascot. Why, you ask? Read this and then research it further if you're still not convinced it's offensive.

I'm thankful for the opportunity to have seen a small portion of his performance, and I may purchase the DVD of his entire performance, or perhaps buy one of his poetry books. His lyrics were creative, informative and well-written, and I'd love to hear them again. Whenever I attend presentations or come across something related to what I'm interested in studying, it helps focus or add to my vision of what it is I want to do with the knowledge I acquire. Seeing his performance about awareness of where our land came from, who it was taken from, and the stories, lives and people who once lived here reinforced my desire to teach what I learn, however that may manifest itself. Having worked with a city naturalist who taught about the Ohlone through school programs and classes open to the public, the future job I have in mind now for myself is based on that. I want to work in a park setting, surrounded by nature, teaching about how Native peoples survived on the same land where we now live in a completely different way. I want my work to bring awareness to Native American culture and help it get the attention it deserves in history books and in our society's awareness. I also want to know today's Native Americans, and get to know people within the Native community. There's such a fine line an anthropologist has to walk when studying a culture that is still alive. I don't want to offend anyone in my studying and work, so I hope to meet Native people and learn from them directly about their culture so I can present their history in a respectful way. Like I said in my last post, it's all about taking those opportunities that come up and being aware of the universe placing things in front of us. My tragedy class TA told me about this performance and strongly encouraged us to attend, so I made sure I went because I knew it would be something valuable and interesting. I'm so glad I went.

To view some clips from his performance, click here. To see some of the script of his show, click here. More information can be found at the show's website at http://www.freelandproject.com/index.html.

Thanks for reading,
Green Gal

Suburbia is where the developer bulldozes out the trees, then names the streets after them.
--Bill Vaughn

(Or in that same vein, America is where developers bulldoze Native American history, then name the streets after them.)